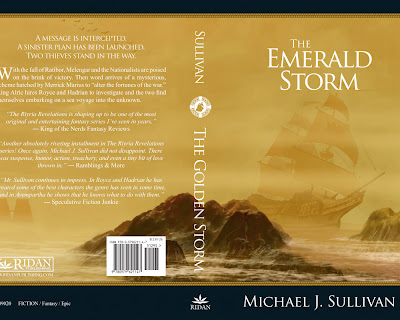 Last year I enjoyed a lot the first three novels in the Michael J. Sullivan’s series “The Riyria Revelations” and therefore among the titles I am looking forward to see published this year are his next two novels in the series, “The Emerald Storm” and “Wintertide”. “The Emerald Storm” is due to be released in April and we already can see the cover artwork for the novel. Speaking of the cover art this is one of the things I noticed at “The Riyria Revelations” series, the artwork for the books is made by the author himself. Michael J. Sullivan does a very good job with his covers, keeping a similar line in the illustrations, with a different color scheme, but after all I understand that this is his intention for the entire series. The cover of “The Emerald Storm” promises new adventures and from the look of it these adventures will take us in a sea voyage. The same promise is found in the novel synopsis:
Ex-mercenary Hadrian Blackwater sets a course on a high seas adventure to find the true heir of Novron but finds himself traveling to a past he hoped to leave behind forever. Royce Melborn knows all too well the folly of challenging the cunning and ruthless Merrick Marius who stands in Hadrian's way and joins his ex-partner for one last mission.
Meanwhile Princess Arista sets off on her own quest to find the heir which leads her into the very heart of the newly formed Novronian Empire which is battling external assaults while trying to hold control over their own half-mad puppet heir.
Posted by Mihai A. at 1:10 PM

Nice cover..like all of them in this series so far. I got digital review copies of the first 3 books, and plan to finally begin reading the series later this month. Looking forward to it.

You've been snooping around Ridan's website I think. As you can probably tell from looking at it however, the cover is unfinished.

For one thing, the spine reads "The Golden Storm," which was VERY briefly considered. (There had been a small discussion about the color of the book being gold when the title clearly stated "Emerald.") Obviously the spine was overlooked when this proof was kicked out.

Secondly, the little emblem on the spine will be changed.

Lastly, the cropping is clearly off.

I would have liked to have all books be a different color, but I also want the books to look good as well as reflect the story. The gold color here is the start of a recycling of the hues. I did consider purple, orange, and red, but none of them worked going ahead and I decided to start the three gold, blue, green over again as blue is perfect for Wintertide and green fantastic for Percepliquis.

Now for your prize Mr. Adascalitei for posting the first article on the new cover: There is an Easter-egg (a hidden treat) built into this particular cover—and yes it is visible on this version. It is a little—very little—thing that I am certain only the most obsessed and bored fan would ever discover or recognize. I’ve put these kinds of little connections in the story for the truly dedicated fan, (the kind that would read the books five times, which is about what someone will have to do to find everything,) but this is the first one I’ve ever put in the covers.

Another excellent cover to the next installment in an excellent series! I'm looking forward to this one!

Jeff, I enjoyed quite a lot the series so far. I recommend it to any fantasy lover :)

Mr. Sullivan, thank you very much for the details regarding your cover art and for letting me know about the hidden treat ;)
You are doing an excellent job with the novels and the covers. I also have to say that I saw a different cover for "Nyphron Rising", not used though, and it looks great. I hope you'll have the chance to use that one too :)

Ben, me too. I am really looking forward to see how this series will conclude :)