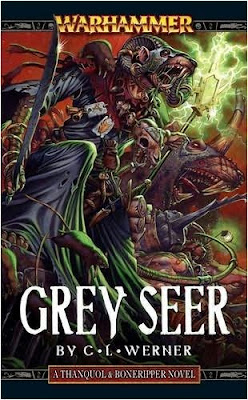 "Grey Seer"
by C.L. Werner
Format: Paperback, 416 pages
Publisher: Black Library
The review is based on a bought copy of the novel.
When the noxious artefact known as the Wormstone is discovered, only one being in the insidious skaven Under-Empire is vicious and ruthless enough to dare harness its awful power: Grey Seer Thanquol. But when the artefact is stolen by smugglers, Thanquol must recover it. Not only that, but a mysterious wizard and his band of henchmen are also trying to stop him. Only by finding the Wormstone, avoiding the murderous attentions of his treacherous subordinates and dodging the displeasure of his superiors in Skavenblight will Thanquol realise his plan to bring the kingdoms of both man and ratkin to their knees...
Among my reading pleasures is the exploration of a couple of long running series of novels set in gaming universes and one of these series is Warhammer. However, it has been a while since I journeyed through the universe of Warhammer and when I decided to return to it the first novel that fell into my hands was C.L. Werner’s “Grey Seer”.
Going farther into the Warhammer universe I have to say that the novels that offer me the most entertaining and interesting moments are those that deal with the negative sides and characters. Such is the case with “Grey Seer” because C.L. Werner deals in his novel with one of the Warhammer races least dealt before in this series of novels, the skaven. “Grey Seer” reflects a small image of the vast universe where the novels are set, with its events unfolding in the city of Altdorf, the Imperial capital, and not only there, underneath it too. The fans of Warhammer universe will find a familiar setting, but that doesn’t mean that the readers that didn’t explore it in the detail before would be lost. Although there are not many explanations in terms of races, locations, magic or religion the new readers will have a foothold and manage to move around the novel’s events.
The main character of “Grey Seer” is the skaven Thanquol, but he is not at his first presence in a Warhammer novel. Thanquol appeared for the first time in the long running Warhammer series Felix & Gotrek, but in it is only here where he takes the central stage. With the spotlight set on Thanquol, C.L. Werner’s novel will also catch an image of the skaven race, exploring its society and featuring many ratmen characters. However, the novel shifts between the grey seer Thanquol and a group of human characters, both with the same interest in the artifact named the Wormstone. I have to say that all the human characters didn’t work for me, being either the initial group of thieves or the later human characters that enter the stage. They seemed rather flat, vaguely outlined and without an in depth motivation. And these motivations, honorable or not, failed to make a mark on me. Instead Thanquol, with his megalomaniac nature and his story, was more interesting for me and I delved myself more eagerly in this side of the novel. More so, Thanquol and the skaven surrounding the grey seer offer a few humorous situations that add to the entertainment of the novel.
The plot of the “Grey Seer” is a simple one, Thanquol and his kin are in search of the long lost artifact, the Wormstone, but due to a coincidence a group of human thieves will stumble upon the same artifact. From here will emerge a conflict between the two groups, but also that of the story. This conflict along with Thanquol and the skaven machinations within their own race will offer many tense moments which lead to action and fighting scenes. The magic will play its role within the story, with not only Thanquol using his magic abilities, but a human wizard too. These action scenes help the novel move in a fast pace reaching its highest point in a final major action-packed battle. C.L. Werner builds scenes that can turn out to be quite violent and grotesque images, but I wonder if not some of the scenes involving the skaven are not offering crude images and are not too graphic for everyone liking.
Despite my time away C.L. Werner helped me re-discover the Warhammer universe with an easy, fun and relaxing reading offered through his novel “Grey Seer”.
Posted by Mihai A. at 12:04 PM

Sounds like a very good read. As a published author of a fantasy trilogy, I welcome you to check out my latest book, The Magic of Fuller, book one, "Keeper of the Stone". http://www.strategicpublishinggroup.com/title/TheMagicofFullerBookOne-KeeperoftheStone.html