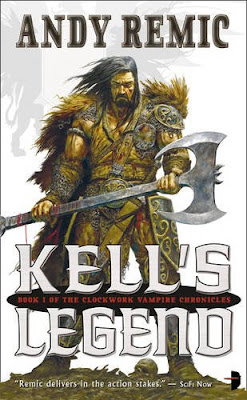 "Kell's Legend"
by Andy Remic
Format: Paperback, 448 pages
Publisher: Angry Robot Books
Review copy received through the courtesy of the administrators of the David Gemmell Awards
The land of Falanor is invaded by an albino army, the Army of Iron. A small group set off to warn the king: Kell, ancient hero; his granddaughter, Nienna and her friend, Katrina; and the ex-Sword Champion of King Leanoric, Saark, disgraced after his affair with the Queen.
Fighting their way south, betrayal follows battle follows deviation, and they are attacked from all quarters by deadly albino soldiers, monstrous harvesters who drain blood from their victims to feed their masters, and the twisted offspring of deviant vachine, the cankers. As Falanor comes under heavy attack and crushing invasion, only then does Nienna learn the truth about grandfather Kell – that he is anything but a noble hero, anything but a Legend.
The David Gemmell Award was established last year and started with a debut year that gathered fans and critiques of the fantasy genre alike around it. In the second year of the awards, looking over the nominees it is easy to spot one title, Andy Remic’s “Kell’s Legend”, because of the homage it pays to the author who names the awards, David Gemmell.
“Kell’s Legend” is a worthy praise offered to its source of inspiration, fully packed with action and fighting scenes and flavored with an amount of violence and gore that will put even some of the horror novels to shame. The pages fly past the reader, because Andy Remic sets a very fast rhythm from the first chapter of the novel. Speaking of chapters, each one of them ends in a peak of action teasing my curiosity to the point that I could hardly resist not to jump over pages just to find out the conclusion of that action sequence. And that is the case with the end of the novel as well, the final page leaving the characters frozen in a battle scene until the next novel of the series will put them into motion.
The central stage of the Andy Remic’s novel is occupied by Kell, as the title suggests it. Together with Kell I could follow three other characters, but also a few characters from the other side of barricade and also on a few places we shift the perspective to the king and queen of Falanor. However, I have to be totally honest and say that besides Kell and Anukis, who plucked moments of sympathy from me, the other characters fell heavily under my attention and I ended up not carrying too much about any of them. Kell and Anukis are not perfect characters either, but they show feelings and memories that make them more vivid and interesting for me. I really liked however the relationship between Kell and Saark and the resulting dialogues of this relationship. These dialogues offered me delightful ironies and welcomed effervescent moments between blurring motioned scenes.
The other character that drew my attention is Anukis and she is the one that introduces to the story the vachine society. I really liked how Andy Remic imagined and pictured this side of the world, but in the end is this part that left me disappointed. The combination between a religious society, isolated by mysterious mountains and with heavy clockwork involved in its ranks and members appealed greatly too me. But, and there is a but, I felt only teased by the image of the vachine society present in “Kell’s Legend” and I was left with a great number of “whys”. As mentioned in the novel the vachine is a religious society with its structures and rules, but not even once a deity is mentioned or why it is structured that way. How did this society come to exist? Why the connection between the vachine, the albino army and the Harvesters? Why the Black Pike Mountains that surround Silva Valley are so dangerous and mysterious? Add to this the questions raised by Kell’s past and regrets and I was left wondering if not too many whys unanswered would not make me indifferent to the answers that might come in the sequels of the novel.
On one hand I have “War of the Worlds” meets David Gemmell’s “Legend” in a clash of action, violence and bloodshed. On the other hand I have some aspects and ideas that do not reach half of their potential. So, in conclusion although rarely I end up with a reading that leaves me totally neutral, such is the case with Andy Remic’s “Kell’s Legend”. And I can only ask myself if I pick the next novel in the series would my opinions change?
Posted by Mihai A. at 12:40 PM

Hmm... Thanks for the review. I've always had the impression that this book was very similar to Gemmell's Legend.

I think the second book is going to be released very soon.

It has many connections with David Gemmell's "Legend", but its original aspects too.