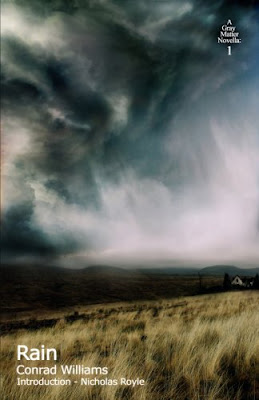 "Rain"
by Conrad Williams
Format: Paperback, 116 pages
Publisher: Gray Friar Press
The review is based on a bought copy of the book.
This is no ordinary storm ...
Ben and his family move in to a French house cloaked by storm clouds. The walls fail to keep out intruders. Warnings appear. There is an accident. There is death. There is rain. Much rain.
Conrad Williams has published eight novels and a collection of stories in his career so far, but also a novella released by Gray Friar Press in 2007, “Rain”.
Last year, one of the novels I enjoyed the most was Conrad Williams’ “One” and among the things that distinguish themselves in that novel is the feelings of the main character for his son. The same thing can be easily noticed in Conrad Williams’ novella, the feelings of the main character, Ben, for his son and his relationship with him, from here emerging the conflict and the denouement of “Rain”. Conrad Williams does an excellent job constructing this relationship, capturing every single feeling, memory and anguish of the main character and working them in favor of the plot. Ben grows with each page, as the story does, and the author leads me toward a path that seemed obvious until one point, when he twists the story in an unexpected turn and therefore giving his story even more power.
“Rain” is told from the first person point of view, everything is related to the main character’s experience, but it is also a family story because from these particular experiences Ben’s family is taking shape and brings its contribution to the story. In truth, everything in Conrad Williams’ story brings an important contribution to the story. The location and the weather have their role in the development of the plot, each element of the novella adding to the feeling of eerie atmosphere and unease. Conrad Williams masterfully brings them into his novella, making them feel sometimes like other living persons, close observers and strangely connected to the drama unfolding around them. All of these elements will help “Rain” not falter once and will make the story one that can’t be easily forgotten.
My first instinct after finishing Conrad Williams’ novella was to look for more of his works, because “Rain” is a short but strong story, as a summer storm, and it left a powerful mark on my mind.
Posted by Mihai A. at 12:03 PM

I'm a big fan of Conrad's writing. If you get the chance, check out London Revenant.

One is a great novel, in fact nothing I have read by Conrad Williams has been anything other than great.

I enjoyed One but it wasn't a favourite. I'm looking forward to reading Decay Inevitable which I have for review. I've also heard good things about Unblemished too which I also have on my shelf. I met Conrad last year at a book signing and he's a really nice guy.

I enjoyed "One" a lot too, although it wasn't in my top 10 of last year. I have "Decay Inevitable" and "The Unblemished" in my reading list too :)
I hope someday I get the chance to meet Conrad Williams ;D

I will look for "London Revenant" too. Thank you Mark for recommendation :)

I really like Conrad Williams' works, so I am looking forward to read "Decay Inevitable" too :)