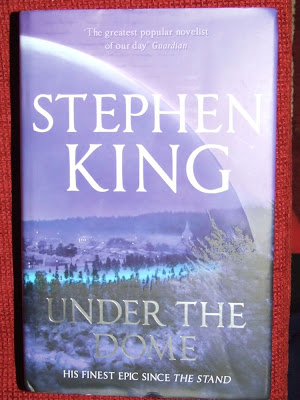 Not many review books received around holidays, but after all that was a time for relaxation and presents. However, the year started in style with a wonderful surprise found in my mailbox.
- "Under the Dome" by Stephen King (through the courtesy of Hodder & Stoughton).
Celebrated storyteller Stephen King returns to his roots in this tour de force featuring more than 100 characters – some heroic, some diabolical – and a supernatural element as baffling and chilling as any he's ever conjured.
On an entirely normal, beautiful fall day in Chester's Mills, Maine, the town is inexplicably and suddenly sealed off from the rest of the world by an invisible force field. Planes crash into it and fall from the sky in flaming wreckage, a gardener's hand is severed as “the Dome” comes down on it, people running errands in the neighboring town are divided from their families, and cars explode on impact. No one can fathom what this barrier is, where it came from, and when – or if – it will go away.
Dale Barbara, Iraq vet and now a short-order cook, finds himself teamed with a few intrepid citizens – town newspaper owner Julia Shumway, a physician's assistant at the hospital, a selectwoman, and three brave kids. Against them stands Big Jim Rennie, a politician who will stop at nothing – even murder – to hold the reins of power, and his son, who is keeping a horrible secret in a dark pantry.
But their main adversary is the Dome itself. Because time isn't just short. It's running out.
With some of the most spectacularly sinister characters King has ever imagined and a driving plot, UNDER THE DOME is Stephen King at his epic best. This book will thrill every reader who's ever loved a novel by King.
Thank you very much!
Posted by Mihai A. at 12:29 PM

(I won't say I can't wait for the review, because I don't like reading *about* the book before I read the book :D)

I know you'll not read the review :)
I hope you'll get the hands on a copy very soon though ;)

Brace yourself, Mihai: this is not a good book. It could be 500 pages shorter and more effective. I've been a Stephen King defender all my adult life, but Under the Dome was just a massive waste of time.

Perhaps I'm still sour about the ending, but then I know to expect poor resolutions from the so-called modern-day Dickens. I'll be interested to hear your thoughts on this one when you're done.

N.R., I love Stephen King, but I had one of his novels that didn't work in the fullest for me. It remains only to read this one before I make an opinion :)