"Children of the New Disorder" by Tim Lebbon & Lindy Moore 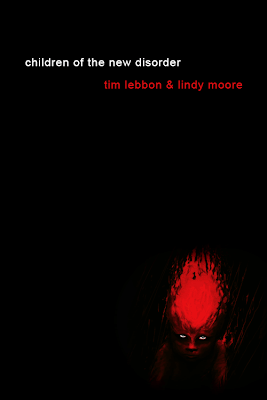 "Children of the New Disorder"
by Tim Lebbon & Lindy Moore
Format: Hardback, 48 pages
Publisher: Creeping Hemlock
The review is based on a bought copy of the book
An age ago, the children stopped coming. The priests' promise of a curative kept the fury and misery at bay, for a time. Then the airships passed over and dropped their antidote. A delighted people drank it up like a mist of ambrosia.
Marooned and hopeless, Chaylie and her family escaped the horrors that followed, only to return to a land plagued by the tragic and the bizarre.
They appear in the night. Deformed. Mewling. Inhuman. And it's Chaylie's job to destroy them in great and blistering heaps. But the living nightmares can only be thrust aside, never defeated. And what if one of them were to survive?
I am not a fan of the limited editions, because they are limited and because of their prices, but I get my little share of this type of books. One of the very few limited editions that found the way to me lately is the novella written together by Tim Lebbon and Lindy Moore, “Children of the New Disorder”.
The story takes place in a world hit by an apocalyptic event, either of the aspects being specific. The world can be very well our own or might be a fantastic one, but this doesn’t have much relevance since the story has the same power despite the setting. The authors only sketch the setting of their novella, without many details, but with enough of elements to create the proper background and atmosphere for the story. On this rough sketch however there are elements that will look very familiar to the reader, scientific experiments for the sake of humanity that can go wrong, the manipulative force of religion or the religious figures, the cruel side of the human nature.
“Children of the New Disorder” has only two characters and it is centered on Chaylie, a survivor of the apocalyptic event. The talent of Tim Lebbon and Lindy Moore is concentrated behind this character, giving him power and strong contour lines, Chaylie giving more force to the story. What is remarkable at Chaylie is that the events in her personal life and her personal experience outcome the apocalyptic event from her perspective. The anxiety, the painful memories and the shock of the present mix together inside Chaylie to create a very strong character in the span of a few pages. Only that her fears and nightmares can have an undesirable result in this novella, for Chaylie and the readers alike.
“Children of the New Disorder” is a very short story, but it is a quick and tightly packed one. Tim Lebbon and Lindy Moore use the available space to build a powerful and disturbing story that doesn’t leave the mind of the reader very soon.
Posted by Mihai A. at 12:03 PM

I've had my eye on this one for a while. It looks very interesting and I've never read anything by Mr. Lebbon so I'm hoping to snag a copy.

Ben, Tim Lebbon is a very good writer. I really like his books and I hope that you'll discover his works too :)