"The Harm" by Gary McMahon 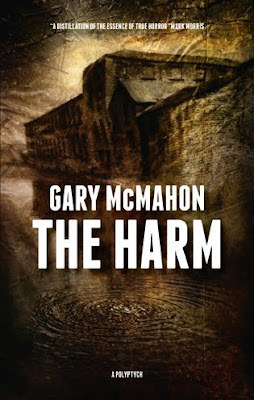 "The Harm"
by Gary McMahon
Format: Paperback, 64 pages
Publisher: TTA Press
Review copy received through the courtesy of the author, Gary McMahon
There were three of them then, Tyler, Roarke and Potter, and they were each eight years old: three young boys on the cusp, not yet aware of the darkness that lies at the heart of the world; children more at home with games and fantasy than hard reality. The day that fused these two states – when a nightmare became real life – changed them forever.
But all that happened much earlier, in the Autumn of 1980. This is what came later, long after the fact. Rather than the details of the incident itself, this story consti­tutes the results of the harm.
I am not fond at all of the electronic formats of books, I spend too much time in front of the computer screen already just to start exercising my passion on the same way. When Gary McMahon asked me if I would be interested in a review copy of his latest novella, “The Harm”, but in the PDF format I had a few moments of hesitation. Still, as I become more than interested in Gary McMahon’s writing career since I read his collection of stories, “How to Make Monsters”, I thought that this will be a small sacrifice.
The novella starts with a short excerpt from a newspaper, describing a violent act and an abuse suffered by three children, Tyler, Roarke and Potter. That excerpt might lead to the impression that “The Harm” will concentrate on that particular act, but Gary McMahon will not focus his efforts there, but on the late consequences of that act. Although starting from an act of excessive violence, “The Harm” will not offer any shocking image, it deals only with the psychological effects, taking the human factor into account. But in the end, those will prove to be more terrifying and with a much stronger effect.
“The Harm” is structured in four parts, three following the three abused children in one point of their adult life and one seen through the perspective of Potter’s sister, Audrey. Each of the four parts throws a light on the consequences of the past violent act on the lives of the victims and those around them. In the true sense of the butterfly effect the events of those twenty-four hours will create ripples through time and space over everyone’s existence, involved directly or indirectly in the horrific event. Gary McMahon takes a step further with the story, reaching towards the reader by taking a news snippet that can be familiar to anyone, stumbling on it while watching TV news or reading the newspaper, but giving it a new sense. Gary McMahon involves the human factor into his news and story, aspect that can be missed while drinking the morning coffee and listening to the news or while reading the details on the newspaper, and therefore putting the reader on thoughts and changing his perspective on the subject.
Previously of “The Harm” my only pleasant experience with a reading made on a computer screen was with Joe Hill’s “Gunpowder”, but this novella changed that, because Gary McMahon’s story is such a high-quality story that “The Harm” is worthy of a reading despite the form in which the novella is found.
Posted by Mihai A. at 11:58 AM