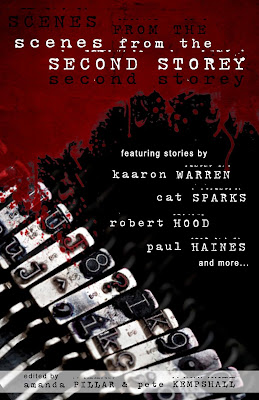 Morrigan Books is a publishing house I become fond of. I followed the course of the young publishing house since its founding, from the first publication of the horror anthology “Voices” until the best product I read from Morrigan Books, “Dead Souls”. I discovered a new author through Morrigan Books, Gary McMahon, with the help of his short stories collection, “How to Make Monsters”, but I also had a title that left me rather disinterested towards it, T.A. Moore’s “The Even” (but in the end it would be impossible to like them all), and in the near future I’ll have the chance to explore and review two other anthologies published by Morrigan Books, “Grants Pass” and “The Phantom Queen Awakes”.
I am happy to see the small independent press company develop, gaining experience and quality, especially since a new title was announced. In September Morrigan Books will release a new anthology, “Scenes from the Second Storey”, edited by Amanda Pillar and Pete Kempshall and collecting stories written by Australian authors. “Scenes from the Second Storey” is inspired by the debut album of The God Machine with the anthology line-up of stories matching the track list. This idea is not used for the first time, Mark S. Deniz, the owner and editor-in-chief of Morrigan Books, publishing two anthologies inspired by songs before, “In Bad Dreams” and “Dead Souls” (I can only imagine how anthologies based on two of my favorite albums, Alice Cooper’s “Welcome to My Nightmare” and Manowar’s “The Triumph of Steel”, would look like). I believe that “Scenes from the Second Storey” will have an international edition too, edited by Mark S. Deniz and Greg Ballam, but I don’t have any information about this.
I also really like the cover made by Reece Notley for the anthology, simple but evocative and with an effective mix of the red and black.
In Scenes, you will meet a girl struggling to find cleanliness in a world full of corruption with Kaaron Warren; follow the twisted mental pathways of the egocentric with Robert Hood; watch two men search for enlightenment down a dark path with Paul Haines; and dance with a girl struggling to find her role within society with Cat Sparks.
"Dream Machine" by David Conyers
"She Said" by Kirstyn McDermott
"The Blind Man" by Felicity Dowker
"I’ve Seen The Man" by Paul Haines
"The Desert Song" by Andrew McKiernan
"Home" by Martin Livings
"It’s All Over" by L.J. Hayward
"Temptation" by Trent Jamieson
"Out" by Stephen Dedman
"Ego" by Robert Hood
"Seven" by Stephanie Campisi
"Purity" by Kaaron Warren
"The Piano Song" by Cat Sparks
Posted by Mihai A. at 1:07 PM

Thanks for this Mihai, I always appreciate your support and honesty regarding Morrigan Books!

I LOVE the idea of a "Welcome to my Nightmare" album, one of my favourites too. Mark, if you're reading this, and want someone to edit it... ;)

Mark, it is my pleasure. Keep up the great work :)

Martin, "Welcome to My Nightmare" is a great album, I can't get enough of it. And if the idea goes further on, remember me too ;D