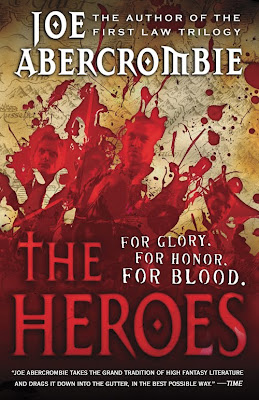 Joe Abercrombie will delight his fans and the fantasy readers with another stand-alone novel next year, “The Heroes”. Orbit Books revealed an initial design for the cover artwork of Joe Abercrombie’s future novel. I say the initial design because the map on the cover is the same with the one on the cover of “Best Served Cold” and will be replaced with a new one once the artist finishes the map. The artist who made the artwork is Steve Stone.
I can’t honestly say that I am a fan of the cover artwork, but I still have to wait for that particular map. However, I can’t say that the amount of blood works in favor of the artwork for me. It is a bit too much and a bit too red. I mean that blood doesn’t always create a clear pellicle, as clear as to generate such a reflection. Or I believe so, because I don’t have such an experience and I don’t wish for one either. Also because of the artwork and the author’s name it is easy to miss the map at a first glance on the cover and that will be a shame since I am certain that the artist will make efforts for a good one. Overall, I cannot say that it is a bad cover, but it is not an excellent one either. At least for me.
Also on the Orbit Books website we can find a teaser of “The Heroes” and that one makes me forget about the cover artwork, because it promises a dark reading focused on characters:
War: where the blood and dirt of the battlefield hide the dark deeds committed in the name of glory. THE HEROES is about violence and ambition, gruesome deaths and betrayals; and the brutal truth that no plan survives contact with enemy. The characters are the stars, as ever, and the message is dark: when it comes to war, there are no heroes…
Meet THE HEROES.
Curnden Craw: a ruthless fighter who wants nothing more than to see his crew survive.
Prince Calder: a liar and a coward, he will regain his crown by any means necessary.
Bremer dan Gorst: a master swordsman, a failed bodyguard, his honor will be restored—in the blood of his enemies.
Over three days, their fates will be sealed.
Posted by Mihai A. at 12:30 PM

Nice cover design. I swear I keep meaning to pick up Best Served cold after all the things I've heard about Joe Abercrombie. I'm looking for some new reading material, and I'll look for his work at my bookstore this weekend.
By the way, happy belated birthday :)

Thank you very much! It is much appreciated :)
I hope you'll discover Joe Abercrombie eventualy :)