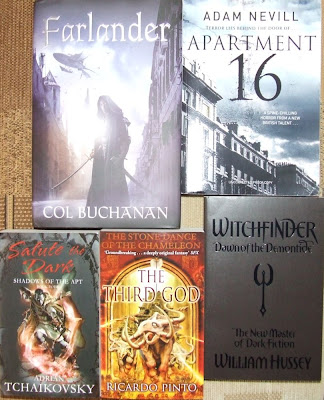 Many wonderful books showed up lately in my mailbox, with one of them holding another great surprise. On the first page of Adrian Tchaikovsky’s “Salute the Dark” there is a quote from one of my reviews and that came as a wonderful surprise and gives me great joy.
- "Farlander" by Col Buchanan (through the courtesy of Pan Macmillan);
The Heart of the World is a land in strife. For fifty years the Holy Empire of Mann, an empire and religion born from a nihilistic urban cult, has been conquering nation after nation. Their leader, Holy Matriarch Sasheen, ruthlessly maintains control through her Diplomats, priests trained as subtle predators.
The Mercian Free Ports are the only confederacy yet to fall. Their only land link to the southern continent, a long and narrow isthmus, is protected by the city of Bar-Khos. For ten years now, the great southern walls of Bar-Khos have been besieged by the Imperial Fourth Army.
Ash is a member of an elite group of assassins, the Rōshun - who offer protection through the threat of vendetta. Forced by his ailing health to take on an apprentice, he chooses Nico, a young man living in the besieged city of Bar-Khos. At the time, Nico is hungry, desperate, and alone in a city that finds itself teetering on the brink.
When the Holy Matriarch’s son deliberately murders a woman under the protection of the Rōshun; he forces the sect to seek his life in retribution. As Ash and his young apprentice set out to fulfil the Rōshun orders – their journey takes them into the heart of the conflict between the Empire and the Free Ports . . . into bloodshed and death.
- "Apartment 16" by Adam Nevill (through the courtesy of Pan Macmillan);
Some doors are better left closed . . .
In Barrington House, an upmarket block in London, there is an empty apartment. No one goes in, no one comes out. And it’s been that way for fifty years. Until the night watchman hears a disturbance after midnight and investigates. What he experiences is enough to change his life forever.
A young American woman, Apryl, arrives at Barrington House. She's been left an apartment by her mysterious Great Aunt Lillian who died in strange circumstances. Rumours claim Lillian was mad. But her diary suggests she was implicated in a horrific and inexplicable event decades ago.
Determined to learn something of this eccentric woman, Apryl begins to unravel the hidden story of Barrington House. She discovers that a transforming, evil force still inhabits the building. And the doorway to Apartment 16 is a gateway to something altogether more terrifying . . .
- "Salute the Dark" by Adrian Tchaikovsky (through the courtesy of Pan Macmillan);
The vampiric sorcerer Uctebri has at last got his hands on the Shadow Box and can finally begin his dark ritual - a ritual that the Wasp-kinden Emperor believes will grant him immortality - but Uctebri has his own plans both for the Emperor and the Empire.
The massed Wasp armies are on the march, and the spymaster Stenwold must see which of his allies will stand now that the war has finally arrived. This time the Empire will not stop until a black and gold flag waves over Stenwold's own home city of Collegium.
Tisamon the Weaponsmaster is faced with a terrible choice: a path that could lead him to abandon his friends and his daughter, to face degradation and loss, but that might possibly bring him before the Wasp Emperor with a blade in his hand - but is he being driven by Mantis-kinden honour, or manipulated by something more sinister?
- "The Third God" by Ricardo Pinto (through the courtesy of Transworld Books);
Amidst the massacre he himself helped bring about, Carnelian is now desperate to find a way to avoid more carnage. But it is too late for that. His spurned lover, Osidian, seeking revenge and determined to win back his stolen throne, has deliberately stoked the wrath of the Masters who rule the world from its centre, Osrakum. Osidian's actions have stirred into motion political events in Osrakum which threaten to overturn the millennial repressive order of the Commonwealth.
Carnelian learns that he and those he loves are now inextricably enmeshed in the terrible power game of the Masters. If he and they are to survive, he has no choice but to play that game himself, though he does not know how. He has no choice but to stand with Osidian in defiance of the invincible power of the Masters. No choice but to take his loved ones deeper into peril.
In his struggle he will find unlooked-for allies and guidance with dreadful motives of its own. And ultimately, he will unleash apocalyptic forces which will bring him and his world to a reckoning none could have forseen, though it has been simmering for four thousand years.
- "Witchfinder: Dawn of the Demontide" by William Hussey (through the courtesy of OUP Oxford).
An Ancient Evil Walks Again
Jake Harker is an outsider, a loser whose nose is always in a horror comic. That is until horror stops being fiction and the Pale Man and his demon Mr Pinch stop Jake on a dark, deserted road. That night, under a tree called the demon's dance, Jake will learn the true meaning of terror . . .
Thank you all very much!
Posted by Mihai A. at 11:02 AM

Which reminds me I need to have another look at Pinto's books one of these days. I read the first one years ago, a very interesing book, but for some reason I never got around to reading the others.

Mihai, Farlander is my current read... yummy!
Salute the Dark and The Third God are on my shelf.

Salute the Dark is awesome, Farlander is good but nothing special (though very entertaining) until at some point, things change dramatically and while the novel itself is still standard though well-written fantasy, but otherwise in the middle of the pack so to speak, the sequel has the potential to raise the series to the top-level.

Apartment 16 seems very well-written if you like straight horror which I do not, so my arc moved along to Robert who is a horror fan

I tried Pinto a while ago, but not for me, too florid for my taste

Val, I have the first two books for some time now, but I think I should finally give them a chance :)

Michael, I am very curious about "Farlander", so I will be reading it very soon :)

Liviu, like Robert I am a horror fan and "Apartment 16" sounds very interesting for me.
I will give Ricardo Pinto a chance too, since it sounds intriguing :)

Reading "Salute The Dark" at the moment and like the previous 3 I don't want it to end! Great fantasy-lite series that isn't childish but maintains an adult sensibility though with an easy and flowing style.

I really have to catch up the series, because I fell a bit behind with it :)

Great mailbox! I have Farlander & Apartment 16 to review too, both sound excellent!

I'm so happy for you regarding your quote - so very cool! :)

Those two sound really interesting indeed. I will read them very soon.
Thank you very much for your kind words, it is much appreciated :)