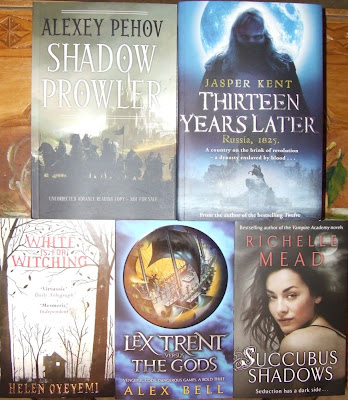 I am always thrilled when Mr. Postman leaves books in my mailbox, now I’ve got even more excited. Because this time it’s quite a selection (not that on other occasions isn't): “Thirteen Years Later” one of my most anticipated novels of 2010, “White is for Witching” because I read somewhere (I am sorry that I don’t remember where) that the novel deserved a nomination for 2009 Bram Stoker Awards but it was left out, “Lexus Trent versus The Gods” because I have Alex Bell’s novels on my bookshelves but I didn’t read them and this will be a good excuse to pick them up and “Shadow Prowler” because I grew up with Russian stories and I am curious to see how Alexey Pehov tackles the fantasy genre.
- "Thirteen Years Later" by Jasper Kent (through the courtesy of Transworld Books);
Aleksandr made a silent promise to the Lord. God would deliver him – would deliver Russia – and he would make Russia into the country that the Almighty wanted it to be. He would be delivered from the destruction that wasteth at noonday, and from the pestilence that walketh in darkness – the terror by night ...
1825. Russia has been at peace for a decade. Bonaparte is long dead and the threat of invasion is no more. For Colonel Aleksei Ivanovich Danilov, life is calm. The French have been defeated, as have the twelve monstrous creatures he once fought alongside, and then against, all those years before. His duty is still to his tsar, Aleksandr the First, but today the enemy is merely human.
However, the tsar himself knows he can never be at peace. He is well aware of the uprising fermenting within his own army, but his true fear is of something far more terrible – something that threatens to bring damnation upon him, his family and his country. Aleksandr cannot forget a promise: a promise sealed in blood … and broken a hundred years before.
Now the victim of the Romanovs’ betrayal has returned to demand what is his. The knowledge chills Aleksandr’s very soul. And for Aleksei, it seems the vile pestilence that once threatened all he held dear has returned, thirteen years later …
- "Succubus Shadow" by Richelle Mead (through the courtesy of Transworld Books);
Georgina Kincaid has formidable powers. Immortality, seduction, shape-shifting into any human form she desires, walking in heels that would cripple mere mortals - all child’s play to a succubus like her.
Helping to plan her ex-boyfriend’s wedding is a different story. Georgina isn’t sure which is worse - that Seth is marrying another woman, or that Georgina has to run all over Seattle trying on bridesmaid dresses. Still, there are distractions. Georgina’s roommate, Roman, is cluttering her apartment with sexual tension. Then there’s Simone, the new succubus in town, who’s intent on corrupting Seth.
But the real danger lies in the mysterious force that’s visiting her thoughts, trying to draw her into a dark, otherworldly realm. Sooner or later, Georgina knows she’ll be too weak to resist. And when that happens, she’ll discover who she can trust, who she can’t...and that Hell is far from the worst place to spend eternity.
- "White is for Witching" by Helen Oyeyemi (through the courtesy of Picador Books);
High on the cliffs near Dover, the Silver family is reeling from the loss of Lily, mother of twins Eliot and Miranda, and beloved wife of Luc. Miranda misses her with particular intensity. Their mazy, capricious house belonged to her mother’s ancestors, and to Miranda, newly attuned to spirits, newly hungry for chalk, it seems they have never left. Forcing apples to grow in winter, revealing and concealing secret floors, the house is fiercely possessive of young Miranda. Joining voices with her brother and her best friend Ore, it tells her story: haunting in every sense, and a spine-tingling tribute to the power of magic, myth and memory. Miri I conjure you . . .
- "Lex Trent versus The Gods" by Alex Bell (through the courtesy of Headline);
Law student Lex Trent’s world is inhabited by fearsome magicians, ageing crones and a menagerie of Gods and Goddesses. And while Lex is seemingly dedicated to his legal studies he’s always enjoyed a challenge – which is why he leads a double life as the notorious cat burglar ‘The Shadowman’ who has been (luckily) evading capture for years.
But Lex’s luck is about to run out because the Goddess of Fortune has selected him to be her player in the highly dangerous Games. Losing is not an option for Lex (particularly as it so often involves dying) but can he really win each of the perilous rounds? Given that the reward for doing so is money, fame and glory – all things that Lex is quite keen on – he’s going to do whatever it takes to make sure he will... and he’s certainly got good experience of cheating.
- "Shadow Prowler" by Alexey Pehov (through the courtesy of Tor Books).
After centuries of calm, the Nameless One is stirring.
An army is gathering; thousands of giants, ogres, and other creatures are joining forces from all across the Desolate Lands, united, for the first time in history, under one, black banner. By the spring, or perhaps sooner, the Nameless One and his forces will be at the walls of the great city of Avendoom.
Unless Shadow Harold, master thief, can find some way to stop them.
Thank you very much!
Posted by Mihai A. at 12:07 PM

You're in for a treat with White Is For Witching - it was fab!

Thank you very mcuh! I plan to read "White is for Witching" next week :)