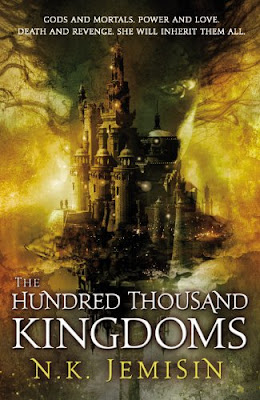 "The Hundred Thousand Kingdoms"
by N.K. Jemisin
Format: Paperback, 432 pages
Publisher: Orbit Books
Review copy received through the courtesy of the publisher, Orbit Books
Yeine Darr is an outcast from the barbarian north. But when her mother dies under mysterious circumstances, she is summoned to the majestic city of Sky – a palace above the clouds where gods’ and mortals’ lives are intertwined.
There, to her shock, Yeine is named one of the potential heirs to the king. But the throne of the Hundred Thousand Kingdoms is not easily won, and Yeine is thrust into a vicious power struggle with a pair of cousins she never knew she had. As she fights for her life, she draws ever closer to the secrets of her mother’s death and her family’s bloody history.
But it’s not just mortals who have secrets worth hiding and Yeine will learn how perilous the world can be when love and hate – and gods and mortals – are bound inseparably.
It was this synopsis that made me interested and helped me discover N.K. Jemisin’s “The Hundred Thousand Kingdoms”, the debut novel published earlier this year, February, by Orbit Books.
It is the same synopsis that left me intrigued in the end, not because it is misleading, but because it didn’t reveal everything about the novel. I am certain that I couldn’t create a better one, mainly for the sole reason of “The Hundred Thousand Kingdoms” being a novel that reaches different levels and layers. The novel is told from the perspective of Yeine and every aspect of the story is revealed from her perspective and it is in direct report with her feelings. N.K. Jemisin manages to create this way a strong character that keeps the reader interested in the outcome of its story. It is true that the first person perspective can be tricky and I didn’t engage with Yeine in the fullest, but I wasn’t indifferent to the character’s destiny.
The beginning of “The Hundred Thousand Kingdoms” proved to be a bit inconsistent, because for a brief period the style Yeine told her story seemed disconcerting. However, with the help of an interesting plot the story oversteps the disrupted beginning and picks up momentum for building an interesting novel. But N.K. Jemisin compensates the beginning with scenes of stunning beauty, finding a substitute for the obvious in words and imaginative replacements. The world that unfolds within the story will help the reader pass with ease through the beginning as well, because N.K. Jemisin creates a rich and detailed world. Everything is built steadily throughout the pages of the novel, every chapter catching sight of the world around, political and cultural traditions, social structures as well as geographical, historical and mythological aspects. The dominant one is the mythology, its aspects beginning with a distant genesis until the contemporary days, with the gods a physical presence of the present.
Although “The Hundred Thousand Kingdoms” has three storylines, it is the one involving the mythological aspects that gets the preponderant attention. The conflict between gods and Yeine’s relationship with the falling deities and their children are on the central stage and from this storyline I could go deeper within the layers of the novel and the themes explored by N.K. Jemisin. The novel works very much on the antithesis, because every theme dealt within its pages is dealt from two opposing angles. Social and society organization, maternal feelings or love emotions are seen from the opposing angles, mainly with the help of Yeine, but also with a little help from the supportive characters. However, N.K. Jemisin also offers a balance between the aspects and as seen throughout the major storyline light and darkness can’t exist one without each other, but also need to be balanced.
I think that if someone would have told me a bit more about the core of the story I would not have picked “The Hundred Thousand Kingdoms” for reading, but better that none did it. Although there are aspects within a love story that made raise my brow in doubt and there are three characters, Dekarta, Scimina and Relad, that are flat and I wished for them to be developed with more care, those are clearly on minority and there is no doubt that N.K. Jemisin makes a strong debut. And since the novel is the first one in “The Inheritance Trilogy” I can only wonder where N.K. Jemisin will lead us further on.
Posted by Mihai A. at 11:59 AM

I bought a copy of the book some time ago and I wanted to read it. But then I lost sight of it.
Fortunately I read your great review. Now I will add The Hundred Thousand Kingdoms to my summer reading list :)

Thank you very much, Michael :) It is an interesting reading and one that proved in the end to be not what I expected :)

From your review I'll look for it on my next trip to the book store. I'm interested in learning how an author weaves in three storylines, which is probably the reason behind the disjointed beginning.

Barbara, I hope you'll enjoy it. It is true that one storyline gets more attention, but indeed is interesting how it is weaved together with the other two :)