"Purple and Black" by K.J. Parker 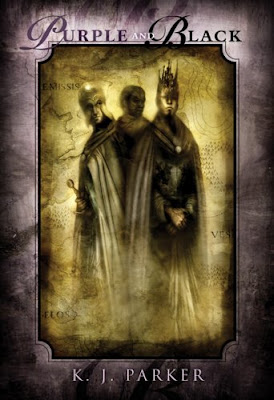 "Purple and Black"
by K.J. Parker
Format: Hardcover, 120 pages
Publisher: Subterranean Press
The review is based on a bought copy of the book
When his father, brothers and uncles wiped each other out in a murderous civil war, Nicephorus was forced to leave the University and become emperor.
Seventy-seven emperors had met violent deaths over the past hundred years, most of them murdered by their own soldiers. Hardly surprising, then, that Nico should want to fill the major offices of state with the only people he knew he could trust, his oldest and closest friends.
But there’s danger on the norther frontier, and Nico daren’t send a regular general up there with an army, for fear of a military coup. He turns to his best friend Phormio, who reluctantly takes the job.
Military despatches, written in the purple ink reserved exclusively for official business, are a miserable way for friends to keep in touch, at a time when they need each other most. But there’s space in the document-tube for another sheet of paper.
K.J. Parker is surrounded by mystery and in such a degree that I am not certain if the author is a she or a he, although lately I’ve seen that many sources refer to K.J. Parker as a female writer. What I am certain of is that I really enjoyed K.J. Parker’s works and her novels are among my favorites. “Purple and Black” is her first attempt for a shorter form after ten novels published so far, a novella a little over 100 pages.
“Purple and Black” is written in the form of a series of letters between Nicephorus, the new emperor of the Vesani, and Phormio, the newly appointed governor of the Upper Tremissis. I didn’t find this method among my readings very often, but I do find it to be a very interesting technique of building a story. K.J. Parker brings the best of this technique in “Purple and Black”, creating with success the plot, the characters and the relationship of the characters with each other. Nicephorus and Phormio are old friends and former colleagues of study, together with four others, but who play a smaller part in the story. The friendship and the relationship of the two main characters can be easily spotted from the correspondence they have. The humor and the confessions that Nicephorus and Phormio share, create the familiarity and the friendship that the two of them have, but also give a strong shape to the two characters. This connection between the characters, be they with a major or minor role within the story, is found at the base of the plot and in the end will amplify the motivations behind the actions and the finality of those actions.
K.J. Parker not only that successfully manages to create the characters and their relationship, but also the plot and a bit of world building. The presence of a true setting is constantly felt, with politics, economic transactions, history and customs that give life to this fantastic world. The small details are powerful offering the reader many little pleasures. I would point towards the one involving the color of the ink used in the correspondence among others, purple for the official letters, black for the usual ones, a small element that I enjoyed even more because of the a few hilarious situations that result from it. The plot starts to built after the first couple of letters and involves many political and military aspects, K.J. Parker inflicting questions of morality, friendship and betrayal in it, elements that will make the story a bit cruel, but real nonetheless. The little pieces of history lay a reliable foundation for this world and shows its roots in the development of the novella. It is very true that the plot becomes obvious from an early stage, but despite this it didn’t drive me away from the story, especially since it has an unexpected twist and turn towards the end.
It is said that the strongest essences come in small vials, but I still regret that “Purple and Black” is a short piece of fiction, a wonderful story in the span of a few pages. I am happy though that my regret is counter-balanced by the fact that I can always find a couple of hours to read and enjoy K.J. Parker’s novella again.
Posted by Mihai A. at 12:34 PM

Wonderful novella indeed, was a top read of mine last year.

The other two shorter pieces by the author that will be out in 2010, A Rich Full Week a story from Swords and Dark Magic which I reviewed separately some weeks ago and Blue and Gold another Subterranenean novel are excellent in their own way too - one is episodic and reads like a short story, the other is a twisted novella, more personal than Purple and Black, with the (unreliable) narrator the best alchemist of the age but also a robber/thief/con-man college chum and brother-in-law of the local Prince

I really want to read this one. Picked up The Folding Knife the other day which also sounds great.

I read this a few weeks ago and loved it so much that I'm now on a mission to seek out all Parker's work. I hope their novels pack as much of a punch as this wee novella did.

Liviu, I love K.J. Parker's works. I just received a copy of "The Folding Knife" and I'll be reading it very soon. Also I look forward to her story from "Swords & Dark Magic" and that new novella, "Blue and Gold" :)

The Evil King, I am looking forward to "The Folding Knife" too :)

Memory, they do. I love K.J. Parker's style. I have all her works and I'll add "Blue and Gold" to my collection as soon as it will be published :)