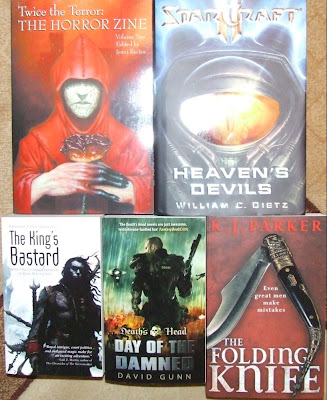 Here are the books that arrived in my mailbox this month. Two of them, "The King's Bastard" and "The Folding Knife", I am especially looking forward to read:
- "The King's Bastard" by Rowena Cory Daniells (through the courtesy of Solaris Books);
Cloaked in silent winter snow the Kingdom of Rolencia sleeps as rumours spread of new Affinity Seeps, places where untamed power wells up. Meanwhile, King Rolen plans his jubilee unaware of the growing threat to those he loves.
By royal decree, all those afflicted with Affinity must serve the Abbey or face death. Sent to the Abbey because of his innate Affinity, the King’s youngest son, Fyn, trains to become a warrior monk. Unfortunately, he’s a gentle dreamer and the other acolytes bully him. The only way he can escape them is to serve the Abbey Mystic, but his Affinity is weak.
Fiercely loyal, thirteen year-old Piro is horrified to discover she is also cursed with unwanted Affinity. It broke their mother’s heart to send Fyn away, so she hides her affliction. But, when Fyn confesses his troubles, Piro risks exposure to help him.
Even though Byren Kingson is only seven minutes younger than his twin, Lence, who is the king's heir, Byren has never hungered for the Rolencian throne. When a Seer predicts that he will kill Lence, he laughs. But Lence Kingsheir sees Byren’s growing popularity and resents it. Enduring loyalty could be Byren’s greatest failing.
- "Death's Head: Day of the Damned" by David Gunn (through the courtesy of Transworld Books);
Lieutenant Sven Tveskoeg is in disgrace. His victory on Hekati, and the emperor’s favour, have turned his patron against him: General Indigo Jaxx wants Sven dead. Exiled to Wildeside, Sven waits for Jaxx’s assassin. He hunts, he fieldstrips his weapons, he tries not to mind. At the age of 28, he’s lived longer than he expected anyway.
But then Sven finds himself offering to save the life of Jaxx's son. This means returning to Farlight, where he finds that the emperor is missing, his empire is collapsing, there are murderous riots in the capital and General Jaxx stands on the edge of ruin. All Sven has to do is nothing. But when has he ever done anything that sensible...
The devil-may-care, not quite 100% human, mercenary soldier/killing machine known as Lieutenant Sven Tveskoeg and his like-minded team, the Aux, are back in a third explosive, non-stop action-filled adventure.
- "The Folding Knife" by K.J. Parker (through the courtesy of Orbit Books);
Basso the Magnificent. Basso the Great. Basso the Wise. Basso the Murderer. The First Citizen of the Vesani Republic is an extraordinary man.
He is ruthless, cunning and, above all, lucky. He brings wealth, power and prestige to his people. But with power comes unwanted attention, and Basso must defend his nation and himself from threats foreign and domestic. In a lifetime of crucial decisions, he’s only ever made one mistake.
One mistake, though, can be enough.
- "Twice the Terror: The Horror Zine, Volume 2" edited by Jeani Rector (through the courtesy of The Horror Zine);
The Horror Zine has burst onto computers all over the world as an ezine. “Twice the Terror” brings you the very best from The Horror Zine as a book. The Horror Zine presents its second in-print anthology, a wicked brew of stories with relentless suspense that ride side-by-side with haunting poetry and eye-popping artwork. Volume 2 from The Horror Zine unveils a fresh approach to basic fears and has twisted, unexpected endings.
“Twice the Terror: THE HORROR ZINE” contains contributions from such famous writers such as Graham Masterton, Bentley Little, Joe R. Lansdale, Deborah LeBlanc, Ed Gorman, Stephen Gallagher, Terence Faherty, and Hugh Fox. But it also contains deliciously dark delights from morbidly creative people who have not yet made the big time…but they will soon.
- "Starcraft II: Heaven's Devils" by William C. Dietz (through the courtesy of Sneak Attack Media).
For the poor, hardworking citizens of the Confederacy's fringe worlds, the Guild Wars have exacted a huge toll. Swayed by the promise of financial rewards, a new batch of recruits joins the fight alongside a slew of mysteriously docile criminals -- and a few dubious military leaders. Eighteen-year-old Jim Raynor, full of testosterone and eager to make things right at home, ships off to boot camp and finds his footing on the battlefield, but he soon discovers that the official mission is not what he's really fighting for.
For the first time ever, StarCraft enthusiasts will learn the origins of the enduring friendship between the young upstart Jim Raynor and the streetwise soldier Tychus Findlay. Watch as they battle on the front lines of a fierce interplanetary war and bear witness to the Confederacy's rank corruption -- corruption so reprehensible that it rains immeasurable death and destruction upon the government's own people.
Thank you all very much!
Posted by Mihai A. at 12:19 PM

The Readings of a Busy Mom said...

Im thinking to get The Kings Bastard it sounds interesting

I'm following up a comment you left on Barbara Martin's blog post about CUT SHORT which received great reviews and was reprinted 3 times in its first year. You may like to know that my second thriller, ROAD CLOSED, is now out and has already received some great reviews - "tense and gripping" (Eurocrime) "fast-paced, keeping you captivated right to the end" (New York Journal of Books) "keeps you guessing and packs some powerful surprises" (Bookersatz) I hope you read and enjoy it!

Ayesha, I was expecting the entire series for some time :)

Leigh, thank you very much for the recommendation :)