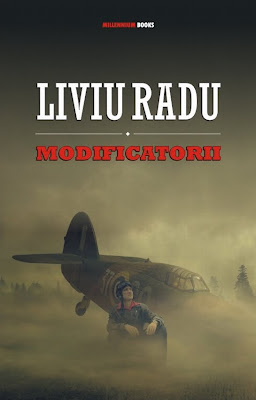 It is settled for me now, when it comes to the Romanian cover artwork Millennium Books is the publishing house to look for. The reason for this is that Millennium Books puts as much effort in the artwork of the covers of their volumes as in the titles they publish and promote. A new such title is another book from the Romanian speculative fiction author Liviu Radu, “Modificatorii” (The Modifiers), due to be released this month. The illustration for the cover of Liviu Radu’s book is made by the Romanian surrealist photograph, George Grădinaru, and it shows that photo manipulation can work wonders on a book cover too, since this artwork is catchy and atmospheric. The premises of the book sound interesting as well:
What if Alexander Nevsky had never defeated the teutons? What if Hannibal had conquered Rome? What if Peter III had ruled Russia and not Catherine the Great? And, at last, what if France had been a part of the British Empire ruled by George V and all the French had bathed in pubs?
Only the modifiers know the answers to these four questions. The history modifiers, those who can influence the events… Is it so?
Liviu Radu tries to discern, in this volume, the tangled threads of the history we think that we know.
Posted by Mihai A. at 1:00 PM