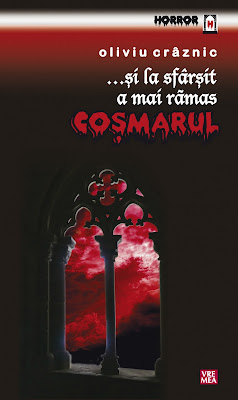 I myself found the book very entertaining. I liked the characters, especially Sellini and Chalais. The ending was very suspensefull. I really think this is a return to the true horror novel. Glad it's a romanian.

I am glad that you liked the book. Unfortunately, it didn't work for me, as much as I wished it would :)

I am very much thanking you for reading and reviewing my book. I admire you as a professional and I respect your point of view. I am anyway a little sad that my first contact to foreign readers is through the SINGLE negative review I received (see Pricajan – The Walpole Moment In Romanian Literature, Nautilus, Shauki, Pest Webzine etc.). To be fair with the foreign readers which cannot read the Romanian reviews, I hope you will allow me to mention a few things related to the problems you saw in the book:
1. There were characters praised by the critics for proper developement, especially the inquisitor, Castlenove, Schwartz and Adrianna de Valois. Arthur was finded undeveloped, but that was my intention from the beginning (the witness character).
2. I find the Arthur’s past essential for explaining the final scene, of course any reader can have his own opinion.
3. I mentioned in the afterword I MIXED some historical periods, so Slovakia is not a problem, but a homage to the beliefs that are still vampires left in Slovakia.
4. The characters are not courting each other… Vincennes courts Josephine, BEFORE arriving at the castle only… Sellini does not court Arthur, she tries to make an alliance with him… Arthur does not court the engaged Adrianna, but he loves her and he is worried for her…in the hole book, there is not a single proposition made, or a single kiss exchanged between the characters…
I hope I have not offended you in any way, I am a big admirer of your work, and I understand a book is not for everyone to like it… It may be I will receive other negative reviews in the future (though I hope not…), but yet is not the case… Of course, the book failed to reach you, and I really regret it, but did not fail to reach others, and I still hope it will reach others more (not everyone of course, unfortunately…)
Thank you again and I wish you the best!

Oliviu, no offence taken and thank you very much for your kind compliments.
I read the other reviews and I am glad that they are positive, I am sorry that your novel didn't work for me. I hope that you'll receive many other positive reviews and you'll reach as many readers as possible.
With all the best, Mihai :)