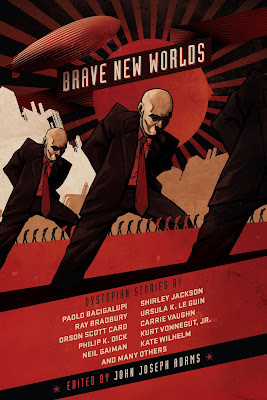 John Joseph Adams worked as an assistant editor at The Magazine of Fantasy & Science Fiction from 2001 until December 2009 and he is the editor of Fantasy Magazine and of the online science fiction magazine, Lightspeed Magazine. His prolific editing career can also be seen in the eight anthologies he published from 2008 until now, the first, “Wastelands”, on January 2008 and the last, “The Way of the Wizard”, on November this year. Night Shade Books will release on January 2011 another very interesting anthology edited by John Joseph Adams, “Brave New Worlds”. The concept of “Brave New Worlds” is truly catching and appealed instantly to me and as John Joseph Adams used the readers, the line-up of authors for this collection of stories is impressing.
YOU ARE BEING WATCHED.
Your every movement is being tracked, your every word recorded. Your spouse may be an informer, your children may be listening at your door, your best friend may be a member of the secret police. You are alone among thousands, among great crowds of the brainwashed, the well-behaved, the loyal. Productivity has never been higher, the media blares, and the army is ever triumphant. One wrong move, one slip-up, and you may find yourself disappeared -- swallowed up by a monstrous bureaucracy, vanished into a shadowy labyrinth of interrogation chambers, show trials, and secret prisons from which no one ever escapes. Welcome to the world of the dystopia, a world of government and society gone horribly, nightmarishly wrong.
In his smash-hit anthologies Wastelands and The Living Dead, acclaimed editor John Joseph Adams showed you what happens when society is utterly wiped away. Now he brings you a glimpse into an equally terrifying future -- what happens when civilization invades and dictates every aspect of your life? From 1984 to The Handmaid's Tale, from Children of Men to Bioshock, the dystopian imagination has been a vital and gripping cautionary force. Brave New Worlds collects 33 of the best tales of totalitarian menace by some of today's most visionary writers, including Neil Gaiman, Orson Scott Card, Kim Stanley Robinson, and Ursula K. Le Guin.
When the government wields its power against its own people, every citizen becomes an enemy of the state. Will you fight the system, or be ground to dust beneath the boot of tyranny?
- “Introduction” by John Joseph Adams
- “The Lottery” by Shirley Jackson
- “Red Card” by S. L. Gilbow
- “Ten With a Flag” by Joseph Paul Haines
- “The Ones Who Walk Away from Omelas” by Ursula K. Le Guin
- “Evidence of Love in a Case of Abandonment” by M. Rickert
- “The Funeral” by Kate Wilhelm
- “O Happy Day!” by Geoff Ryman
- “Pervert” by Charles Coleman Finlay
- “From Homogenous to Honey” by Neil Gaiman & Bryan Talbot
- “Billennium” by J. G. Ballard
- “Amaryllis” by Carrie Vaughn
- “Pop Squad” by Paolo Bacigalupi
- “Auspicious Eggs” by James Morrow
- “Peter Skilling” by Alex Irvine
- “The Pedestrian” by Ray Bradbury
- “The Things that Make Me Weak and Strange Get Engineered Away” by Cory Doctorow
- “The Pearl Diver” by Caitlín R. Kiernan
- “Dead Space for the Unexpected” by Geoff Ryman
- ““Repent, Harlequin!” Said the Ticktockman” by Harlan Ellison®
- “Is This Your Day to Join the Revolution?” by Genevieve Valentine
- “Independence Day” by Sarah Langan
- “The Lunatics” by Kim Stanley Robinson
- “Sacrament” by Matt Williamson
- “The Minority Report” by Philip K. Dick
- “Just Do It” by Heather Lindsley
- “Harrison Bergeron” by Kurt Vonnegut, Jr.
- “Caught in the Organ Draft” by Robert Silverberg
- “Geriatric Ward” by Orson Scott Card
- “Arties Aren’t Stupid” by Jeremiah Tolbert
- “Jordan’s Waterhammer” by Joe Mastroianni
- “Of a Sweet Slow Dance in the Wake of Temporary Dogs” by Adam-Troy Castro
- “Resistance” by Tobias S. Buckell
- “Civilization” by Vylar Kaftan
- “For Further Reading” by Ross E. Lockhart
Posted by Mihai A. at 12:00 PM

The Vonnegut story is in Welcome to the Monkey House and it's just typical Vonnegut...hilarious in a sad but true way. :)

Bryce, I am not familiar with that story, but I am looking forward to read it :)