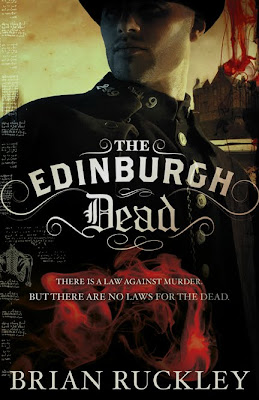 Among the fantasy series that I loved a lot Brian Ruckley’s “Godless World” can be found. “Winterbirth”, “Bloodheir” and “Fall of Thanes” took me into an interesting and catchy setting and captured my attention with a gritty story, some excellent battle scenes and a few very strong characters. Since then I wished to read more of Brian Ruckley’s stories, those that he will write, because after all “Godless World” is his debut series. Such an occasion will arise next year when Orbit Books will release Brian Ruckley’s new novel, “The Edinburgh Dead”. It is a shift from the “Godless World” novels, but that is not a problem, Brian Ruckley’s style appeals to me and his new novel looks to be interesting.
Mixing real history and historical figures with magics and conspiracies, this novel imagines the Edinburgh of 1827, populated by mad alchemists who treat Frankenstein as textbook rather than novel, and by a criminal underclass prepared to treat with the darkest of powers.
The plot follows the progress of an officer of the recently formed Edinburgh City Police as he follows a trail of undead hounds, emptied graves, brutal murders and mob violence into the deepest and darkest corners of Edinburgh’s underworld – both literal and magical – and back again to the highest reaches of elegant, intellectual Edinburgh society.
Posted by Mihai A. at 12:01 PM

and it's got some sweet cover art as well!

So for us Brian Ruckley virgins, do you recommend we read the entire Godless WOrld series first, or could just jump in with Edinburgh Dead?

I am absolutely in love with this book, as well as its author. Not only is it well written, but its multidimensinal scenery and characters makes me think that they actually exist!

I agree with redhead. The cover designs are fabulous. I'd hire that artist to make my covers any day. :D

The Edinburgh Dead is on my list for 2011.
I hope it will be as good or even better than Brian Ruckley's Godless World books.

Redhead, you can read "The Edinburgh Dead" first without a problem. "Godless World" series and the novel are not related. So, no problem at all :)

Volataire, the artist is Larry Rostant, who made many wonderful covers :)

Michael, I absolutely love "Godless World" and I am looking forward to "The Edinburgh Dead" :)