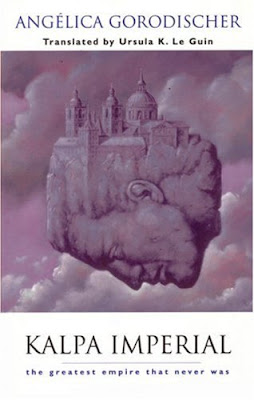 "Kalpa Imperial"
by Angélica Gorodischer
Format: Paperback, 246 pages
Publisher: Small Beer Press
The review is based on a bought copy of the novel
Kalpa Imperial is the first of Argentinean writer Angélica Gorodischer’s nineteen award-winning books to be translated into English. In eleven chapters, Kalpa Imperial’s multiple storytellers relate the story of a fabled nameless empire which has risen and fallen innumerable times. Fairy tales, oral histories and political commentaries are all woven tapestry-style into Kalpa Imperial: beggars become emperors, democracies become dictatorships, and history becomes legends and stories.
But Kalpa Imperial is much more than a simple political allegory or fable. It is also a celebration of the power of storytelling. Gorodischer and acclaimed writer Ursula K. Le Guin, who has translated Kalpa Imperial, are a well-matched, sly and delightful team of magician-storytellers. Rarely have author and translator been such an effortless pairing. Kalpa Imperial is a powerful introduction to the writing of Angélica Gorodischer, a novel which will enthrall readers already familiar with the worlds of Ursula K. Le Guin.
Angélica Gorodischer is considered to be one of the three most important woman writers of the Spanish language science fiction, has published more than 19 novels and collections of short stories and has a multiple awarded career behind her. “Kalpa Imperial” was originally published in 1983, its first part, and in 1984, both volumes together. It is the only work of Angélica Gorodischer translated into English, by the well-known Ursula K. Le Guin, and published in 2003 by Small Beer Press.
“Kalpa Imperial” cannot be define as a novel exactly, the volume containing eleven stories independent of each other, but which together take into perspective the history of a nameless empire. The volume spans on a long period of time and this fact is shown even from the title of Angélica Gorodischer’s novel, kalpa being a Sanskrit word that defines a long period of time in Hindu and Buddhist cosmology and spanning for about 4,3 billion of years. But as we can see from the first and last stories of the novel it is not the only period of time when the empire existed, it has a prior existence felt in the first story and it enters into a step of its existence with the end of the last story.
Angélica Gorodischer’s “Kalpa Imperial” cannot be defined as the pure fantasy either, there is no magic present and the world is created with the help of the story, without going deeper into unnecessary or burdening details. The stories of “Kalpa Imperial” take the reader into a journey not only through the history of the empire, but mainly through the human factor. The rulers are succeeding to the throne, due to different events and personal actions, but neither of them acts badly for the sake of negative actions. They act according to their beliefs, to their own set of moral codes and to their greater or smaller benefits. The novels features also events that change the rulers of the empire, circumstances that lead to a new way for the empire and a smaller history that imitates on a smaller scale the rise and fall of the entire empire. “Kalpa Imperial” feels like a non-fiction, not in the way of collecting historical facts in a cold and distant manner, but in the pleasant and comfortable display of “One Thousand and One Nights”, with the moral conclusions resulting from here.
Actually, I believe that I am wrong, there is magic in Angélica Gorodischer’s “Kalpa Imperial”, the magic of the language. All the stories are narrated by a storyteller and the technique is such wonderfully used that the readers almost feel the presence of the storyteller and an intimate connection to the stories. Because the presence of the storyteller is almost alive the reader constantly feels the tone of the stories and the changes it suffers. The beauty of descriptions, the simplicity of the prose on some places, the cynicism, sarcasm and humor are all making the stories more colorful and vibrant. The humor of Angélica Gorodischer is even more present in the last story of the volume, where a story is told within the story and where we can discover well known names of movies and actors hidden in the houses and names of that tale’s characters and some events similar to ones of Roman and Greek mythology. It is a discovery as delightful as the story which is a part of.
“Kalpa Imperial” suffers a bit from the names the readers encounter within the novel. Characters and dynasties often have names long and confusing. Although many of the stories work as an allegory or a political comment and the names might not be very important, I still stumbled a bit over them in Angélica Gorodischer’s novel. Also, as I said the novel describes events from an empire history through eleven different stories, but taken all into account in one bite might prove difficult to digest. Instead, reading patiently one story at a time and rummaging them carefully will make the volume more satisfying.
In the book’s presentation we can read that “Kalpa Imperial is the first of Argentinean writer Angélica Gorodischer’s nineteen award-winning books to be translated into English”. Sadly, seven years after its publication it is the only one available in English. The situation is so much unfortunate because “Kalpa Imperial” proves that the English market, and not only, has nothing but to gain from the translation of Angélica Gorodischer’s works.
Posted by Mihai A. at 12:00 PM

But I don't think it is the kind of sf/f book that appeals to the american fandom, at least judging from your review, so perhaps that is why no more works of her have been translated.

It is a great book. I thought of that too and I believe that it didn't sell very well and didn't hit the English market properly. I will still look for Angelica Gorodischer's books though, because she is a wonderful writer :)

I just finished reading this book about a week ago. It was truly a great read. Angelica Gorodischer is a very good author, and a very good writer.

"Kalpa Imperial" is a great read and Angelica Gorodischer a great writer indeed :)

Hi Mihai, enjoyed your review of Kalpa Imperial. It's one of my favorite books that we've published. One note: it sold quite well in the USA whether you're considering it as a translation, a book from an indie press, or a novel-in-stories, or just a plain novel. Oddly, two years after it came out we even sold hardcover right to ibooks (the cover of that edition is traditional fantasy, perhaps not the best fit to the book). The book has its fans (it's taught in a couple of colleges) and we are hoping to publish more of Angélica's books here but we can't afford to commission a translation so we're at the mercy of translators working on the books for their degrees or out of love and so far none of them have sent us a finished book. Fingers crossed as I'd love to read and publish more of her work.

Thanks for bringing this to my attention. Kalpa Imperial sounds like something unique.

Gavin, thank you very much for clearing the things up. I have to admit that the translation costs were something I didn't think of. It is a bit difficult indeed, especially since the costs of the book can rise unpleasantly because of it. I hope you will manage to publih more of Angelica Gorodischer's works and I am keeping my fingers crossed for this to happen.
Good luck and keep up the great work! :)

Chad, it is and it deserves all the attention it can get :)