In the mailbox - Romanian edition 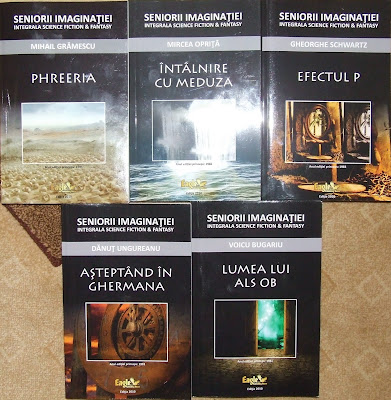 Recently I discovered a very interesting and meritorious initiative of the Romanian Science Fiction and Fantasy Society (Societatea Română de Science Fiction și Fantasy). It is an initiative in the benefit of both Romanian Science Fiction and Fantasy writers and readers, but not for the sole benefit of them. SRSFF together with the Eagle Publishing House have as their goal the publication of a single collection for the Romanian speculative fiction, from its beginnings until the modern days. The collection already started with the first five titles you see above and which I ordered immediately I found about them. Another interesting aspect of this wonderful initiative is that the titles released by the SRSFF and Eagle Publishing House are available on the Amazon site as well, in the original language, but maybe this will be a first step in bringing them, or at least the best of them, in an English translation someday. I really hope that will come to happen. Here are the first titles available and which I ordered for my personal library:
“Phreeria” by Mihail Grămescu - The world became a strange place. A place where the human civilization tries to survive in closed, industrial cities where the recovered technology is used on large scale in order to maintain life and in Phreeria, the melted South Pole, where the savagedom immigrants fight for their lives, eat quicho and search for a job. The Great War has ended. The Eternal War begun. The metamorphosis, too. Using the Great Game rules, the survivors try to enforce the Peace before the Condor's Conquista extends to the galaxy.
“Întâlnire cu meduza” (Meeting with medusa) by Mircea Opriță – The volume of short fiction “Meeting with medusa” was published in the old collection, “Isosceles Triangle”, of Tineretului Publishing from Bucharest; the book registers, consubstantial, on the “poetic” coordinate which, later, Mircea Opriță will define and highlight as a more ample movement in the science-fiction literature of a time.
“Efectul P” (The P Effect) by Gheorghe Schwartz - Our conscience, our education, our way of life prepare us for death. We are conceived for a limited existence. What if, one day, the entire population became aware of the immortality perspective and nobody will must die on Earth? And what if, ourselves, must take a decision to maintain or to cease these perspective?
“Așteptând în Ghermana” (Waiting in Ghermana) by Dănuț Ungureanu - Waiting for redemption in a future world obsessed by sex and violence, rock music and deafening noises, the escape of Yablonski is more and more dificult. The masses are abrutized and manipulated and Ghermana is the endless purgatory...
“Lumea lui Als Ob” (The World of Als Ob) by Voicu Bugariu – The mental living of countless lives, at choice, through the conservation of the body on the unlimited time (“Noapte bună, Sophie” – Good night, Sophie), cosmic journeys through worlds unseen yet, but imagined, of the universe (“Lumea lui Als Ob” – The World of Als Ob), parallel SF or fantasy worlds described by Voicu Bugariu in moral stories and aesthetical parables, published in this wonderful volume in which, says the author, “I’ve started to aim for the clarity, even the condensation, I tried to save words, and above all, to express myself clearly. Also, I searched, as much as I could, to reach a certain elegance of the style.”
Reviews to follow soon.
Posted by Mihai A. at 12:00 PM