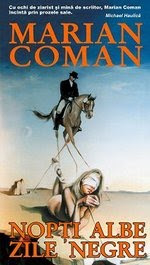 “Nopți Albe, Zile Negre” (White Nights, Black Days)
by Marian Coman
Format: Paperback, 146 pages
Publisher: Tritonic
The review is based on a bought copy of the book
When it comes to the Romania writers the one name that impressed me lately and that comes immediately into my mind because of this fact is Marian Coman. His book “Testamentul de Ciocolată” (The Chocolate Testament) was a delightful discovery for me and it made me go in search of more of Marian Coman’s works. Therefore I found the other book of fiction published by Marian Coman, his debut volume, “White Nights, Black Days”.
“White Nights, Black Days” is structured in a series of short stories, related one with each other through a character, a location or an event. Not only that, but the short stories have a binder in form of the small pieces written from the perspective of the author that introduce them and make the book feel like a novel, although not in its typical form. “White Nights, Black Days” is the story of friendship and of the memories left by friendship and childhood. It is a volume of pure humanity, but that also transgresses the reality.
Marian Coman’s talent is felt on every page of the novel, he uses language with so much ease that the reader is lost in the reading, forgetting about the time and place of the process.
“I am thinking sometimes that I am a chopping machine. A monstrous chopping machine from which, like endless worms, the words are crawling outside. I am a chopping machine, a silent mill that grinds memories, that crashes readings, music and people, I am a chipped mixer that mingles fragments of dusty myths and caught on the fly ideas, I am a neuronal grater that lays on the paper a compact paste in which the smiles of friends, the grins of strangers, the moans of lovers, the morning coffee or the breakfast eaten at noon can still be read.”
He manages to create images that make an imprint of the reader’s mind, scenes that linger in thoughts long after the reading is over, similar to the black dots left on the eye by the staring in the sun. Sometimes it can be said that the scenes can be catalogued as grotesque or more fitted for a horror novel, but those are not meant to terrify or repel, but natural ways for the story to develop or as the reader will discover in the light of the end of the novel a consequence of the final twist. Marian Coman creates a little gem, using words, simple sentences or intricate phrases that turn “White Nights, Black Days” into an experience hard to forget.
“Last night I caught a man. I found him in a dark corner and I broke his legs so he can’t escape. He soaked with blood and I gripped him easily, with my nails, so that I will not get dirty. How many dreams he had in his hair and how much remorse was caught on his clothes! And how scared he felt while I was watching him, hanged in the noose of my claws.”
“White Nights, Black Days” is the story of a friendship, but also of childhood memories, with the good and the bad. The Romanians who spent their childhood in the final years of the Communist regime will identify and relate with some of the Marian Coman’s stories effortlessly. Makeshift toys, games, habits and legends all play a part in the life of the book’s characters and will create a stronger emotional connection between these readers and the novel. Marian Coman has room in his novel for one of the most known Romanian myths as well, only giving it a new perspective, thoughtful and original. “White Nights, Black Days” is also a story of life and death. The finality of death is a constant presence in the volume, playing an important role, but also inflicting more force into life. The story of “White Nights, Black Days” has a constant bitter-sweet tone, all the pieces using and ending preponderantly in a melancholically note.
“White Nights, Black Days” is deeply rooted into reality, but the boundary with the imaginative is ambiguous. Without a clear obstacle and unchallenged the real world becomes fantasy and imaginative blends with reality and nothing will state clearly which is which. The end of the novel throws a light on this boundary and makes things come into focus, but I have to admit that it is not something I am fond of. I believe that I understand the message and the intention of Marian Coman, but I would have liked that the diffuse line between the realities to remain as blurred in the end as it is on the bulk of the volume. There are one or two stories within the book that seem misplaced, beautiful, but somehow not part of the general line. However, looking at the central stage of “White Nights, Black Days” these are minor issues and do not turn into an impediment for a wonderful reading.
“I believe that in everyone’s life there are providential meetings. Meetings which you are not allowed to miss or, on the contrary, at which it is better not to get to.”
Well, I am very happy that I met “White Nights, Black Days”, it showed me again that Marian Coman is a very talented writer. It also made me think that if I had the power I would force Marian Coman to write more. Better still, I would pay him to do it.
Posted by Mihai A. at 12:00 PM

I think he'd prefer the payment instead of being forced ;)

Marian Coman is a captivating author. As you said, her talent can be felt on every page of her books. She writes with such passion, and such sincerety.

Radu, I believe he would :)

Volataire, Marian Coman is actually a he :)