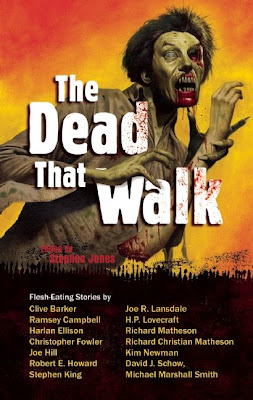 One of the titles that went straight to my shopping list the instant I saw it is the upcoming anthology edited by Stephen Jones and which will be released in December by Ulysses Press, “The Dead That Walk”. But the fact that Stephen Jones is one of my favorite editors is not the only reason for the inclusion of this anthology on my shopping list. Looking over the line-up of “The Dead That Walk”, that I found on Stephen Jones' website, offered me other great reasons.
The Dead Walk Among Us! Of all the ghoulish monsters, zombies are the most horrific. Reanimated corpses of real people—perhaps even a former friend or relative—these undead brethren rise from the grave to devour your delicious, living flesh. Far more sophisticated than the brain-eating mobs popularized in movies, zombies are as diverse as living humans, and this collection presents the complete blood-rich history of zombie literature set in the early 19th century, the Great Depression and the futuristic zombie apocalypse of tomorrow. Bringing together the greatest zombie authors—Stephen King, Richard Matheson, Clive Barker, Harlan Ellison, H.P. Lovecraft, Robert E. Howard, Ramsey Campbell, Joe R. Lansdale, Kim Newman, Michael Marshall Smith, Joe Hill, and many others—The Dead That Walks offers terrifying tales of dread that will drag you screaming into a nightmare world where dissolution does not mean the end and those who survive are next on the menu.
- "Introduction: Shoot'em in the Brain" by Stephen Jones
- "Where There's a Will" by Richard Matheson & Richard Christian Matheson
- "For the Good of All" by Yvonne Navarro
- "The Things He Said" by Michael Marshall Smith
- "The Last Resort" by Mark Samuels
- "Bobby Conroy Comes Back From the Dead" by Joe Hill
- "The Crossing of Aldo Ray" by Weston Ochse
- "Obsequy" by David J. Schow
- "Zombonia" by Nancy Holder
- "Cool Air" by H.P. Lovecraft
- "Call First" by Ramsey Campbell
- "Joe and Abel in the Field of Rest" by Lisa Morton
- "Midnight at the Body Farm" by Brian Keene
- "Dead to the World" by Gary McMahon
- "The Long Dead Day" by Joe. R. Lansdale
- "A Call to Temple" by Kelly Dunn
- "Haeckel's Tale" by Clive Barker
- "The Rulebook" by Christopher Fowler
- "Black Canaan" by Robert E. Howard
- "The Silent Majority" by Stephen Woodworth
- "Sensible City" by Harlan Ellison®
- "Granny's Grinning" by Robert Shearman
- "Amerikanski Dead at the Moscow Morgue or: Children of Marx and Coca Cola" by Kim Newman
- "Tell Me Like You Done Before" by Scott Edelman
- "Home Delivery" by Stephen King
The cover artwork is made by the same amazing artist who is Les Edwards.
Posted by Mihai A. at 12:32 PM

I don't really buy anthology's but I may have to get this one - the cover is awesome!

I grew quite fond of anthologies. Still I prefer novels, but I like from time to time to read anthologies. The cover is awesome indeed :)