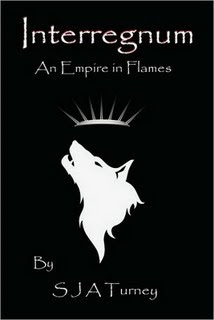 "Interregnum"
by SJA Turney
Format: Paperback, 444 pages
Publisher: YouWriteOn.com
Review copy provided through the courtesy of SJA Turney
For twenty years civil war has torn the Empire apart; the Imperial line extinguished as the mad Emperor Quintus burned in his palace, betrayed by his greatest general. Against a background of war, decay, poverty and violence, men who once served in the proud Imperial army now fight as mercenaries, hiring themselves to the greediest lords.
On a hopeless battlefield that same general, now a mercenary captain tortured by the events of his past, stumbles across hope in the form of a young man begging for help. Kiva is forced to face more than his dark past as he struggles to put his life and the very Empire back together. The last scion of the Imperial line will change Kiva forever.
SJA Turney made his debut this year with a historical fiction novel, “Marius’ Mules”, followed shortly by a fantasy novel, “Interregnum”, set in a very similar setting.
The second novel of SJA Turney, “Interregnum”, is set in fantastic world, but one very similar with the Roman Empire. The world of “Interregnum” has politics, military aspects and historical facts that resemble a lot with the scheming for power, the legions and the maddened emperors of the Roman Empire. Also looking over the map at the beginning of the novel, the Turney’s world looks very similar with the map of Europe, a little distorted though. This is the only element, if I am not mistaken, besides the story that will incline the novel towards the fantasy genre. Although I would have liked to see a bit more depth to this world, in terms of customs and religion, I have to admit that I find it to be an interesting setting.
The novel moves around quite a number of characters, shifting from different point of views. Above all I find the most attractive and powerful character to be Kiva, but I can’t honestly say that I grew very familiar with him either. All the characters have their place in the story, but because of the fact that the novel moves often from a point of view to another I think that these characters suffer a bit in their development. They are involved in familiar and predictable plot, but one turned by the author in an interesting one through a series of events and actions that will lead to some unexpected turns. The story benefits also from a lot of very good action scenes and very engaging battle scenes. I really liked these scenes, but I have to say that some of these scenes can be a bit brutal and gory.
Still, I found some of the aspects of “Interregnum” not sitting well with me. I found some of the characters actions inconsistent and misplaced. To give you an example, at the beginning of the novel after a young Quintillian assists at his first very brutal battle scene and recoils from the image of that battle scenes moments later he shots a running man with a bow pretty nonchalantly. Like I said the novel moves around a number of characters, but from these ones only one is a woman, Sathina, and it lacks heavily feminine figures. It is true that it is a military fiction, but I believe that the novel would have benefit from the presence of more feminine characters, be them minor ones and their absence weakens the story greatly.
Overall, I think that SJA Turney’s “Interregnum” would not be suitable for any awards, but it is a relaxing one with a military and action packed story.
Posted by Mihai A. at 12:51 PM

Nice review, thanks! Is there any magic in the story?

Good review! But the book didn't make it to my top hundred to read books. Anyway I will add it to my never ending book list.

BetweenTwoBooks, no magic. It is a low fantasy novel, if I can call it this way :)

Michael, I understand you perfectly. I have a huge reading list and an equal huge shopping list :)