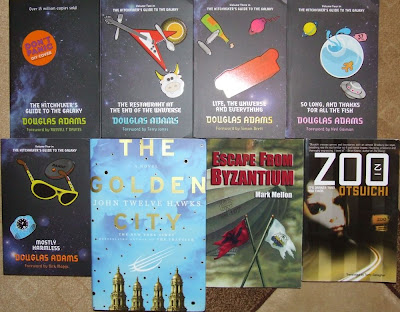 Once again here are the latest arrivals in my mailbox:
- "The Hitchhiker's Guide to the Galaxy" by Douglas Adams (through the courtesy of Tor UK);
Thirty years of celebrating the comic genius of Douglas Adams…
On 12 October 1979 the most remarkable book ever to come out of the great publishing corporations of Ursa Minor (and Earth) was made available to humanity – The Hitchhiker’s Guide to the Galaxy.
It’s an ordinary Thursday lunchtime for Arthur Dent until his house gets demolished. The Earth follows shortly afterwards to make way for a new hyperspace bypass and his best friend has just announced that he’s an alien. At this moment, they’re hurtling through space with nothing but their towels and an innocuous-looking book inscribed with the big, friendly words: DON’T PANIC.
The weekend has only just begun…
- "The Restaurant at the End of the Universe" by Douglas Adams (through the courtesy of Tor UK);
If you’ve done six impossible things this morning, why not round it off with breakfast at Milliways, the Restaurant at the end of the Universe?
Which is exactly what the crew of the Heart of Gold plan to do. There’s just the small matter of escaping the Vogons, avoiding being taken to the most totally evil world in the Galaxy and teaching a space ship how to make a proper cup of tea.
And did anyone actually make a reservation?
- "Life, the Universe and Everything" by Douglas Adams (through the courtesy of Tor UK);
After a series of events which have involved Arthur Dent being alternately blown up and insulted in more bizarre regions of the Galaxy that he has ever dreamt existed, he finds himself stranded on Prehistoric Earth. Luckily an amazing rescue by Ford Prefect and a time eddy, cleverly disguised as a sofa, lands them in the middle of Lords two days before the world is due to end.
It’s just not cricket…
- "So Long, and Thanks for All the Fish" by Douglas Adams (through the courtesy of Tor UK);
There is a knack to flying. The knack lies in learning how to throw yourself at the ground and miss. It’s not an easy thing to do and Arthur Dent thinks he’s the only human who’s been able to master this nifty little trick – until he meets Fenchurch, the girl of his dreams.
Fenchurch knows how the world could be made a good and happy place. Unfortunately she’s forgotten. Convinced that the secret lies within God’s Final Message to His Creation they go in search of it.
And in a dramatic break with tradition – actually find it…
- "Mostly Harmless" by Douglas Adams (through the courtesy of Tor UK);
Arthur Dent hadn't had a day as bad as this since the Earth had been blown up.
Depressed and alone, Arthur finally settles on the small planet Lamuella and becomes a sandwich maker. Looking forward to a quiet life, his plans are thrown awry by the unexpected arrival of his daughter.
There’s nothing worse than a frustrated teenager with a copy of the Hitchhiker’s Guide to the Galaxy in their hands. When she runs away – Arthur goes after her determined to save her from the horrors of the universe.
After all – he’s encountered most of them before…
- "The Golden City" by John Twelve Hawks (through the courtesy of Doubleday);
In The Golden City, Twelve Hawks delivers the climax to his spellbinding epic. Struggling to protect the legacy of his Traveler father, Gabriel faces troubling new questions and relentless threats. His brother Michael, now firmly allied with the enemy, pursues his ambition to wrest power from Nathan Boone, the calculating leader of the Brethren. And Maya, the Harlequin warrior pledged to protect Gabriel at all costs, is forced to make a choice that will change her life forever.
A riveting blend of high-tech thriller and fast-paced adventure, The Golden City will delight Twelve Hawks's many fans and attract a new audience to the entire trilogy.
- "Escape from Byzantium" by Mark Mellon (through the courtesy of Mark Mellon);
Simon Rosencreutz, a conscript officer in the Holy Army of the Revolution, wants nothing more than to escape from Zoorland, a strange, dangerous blend of revolutionary Russia and Iran. Saved at the last second from imminent execution, promoted and transferred from the hazardous front to the seeming safety of Byzantium, Zoorland’s capital, Rosencreutz finds himself rescued from death by combat only to be trapped in a nightmare of intrigue and suspicion, a moral quicksand of deceit, coups, plots, and counter-plots.
Rosencreutz must deal with strange, mysterious figures: the beautiful and enigmatic Euzhenie Makarova, the preposterous, avant-garde artist Kokoshka, the austere, suspicious prelate Basileus Ulyanov, and, most sinister of all, his demanding commanding officer, General von der Goeltze. Protection is offered, even friendship, but is it just for their own purposes? And only to betray him in the end?
Beset with conspiracy on every side, uncertain who to trust, and in constant mortal peril, Rosencreutz can only rely on his keen wits, deadly aim, and iron nerve.
Escape From Byzantium is a slam-bang action story, full of blood and thunder with a gangbuster climax that will leave you on the edge of your seat.
- "Zoo" by Otsuichi (through the courtesy of Haikasoru).
A man receives a photo of his girlfriend every day in the mail...so that he can keep track of her body's decomposition. A deathtrap that takes a week to kill its victims. Haunted parks and a child with the power to do anything at all, and his poor unfortunate parents. These are just a few of the stories by Otsuichi, Japan's master of dark fantasy.
Thank you all very much!
Posted by Mihai A. at 12:51 PM

Escape From Byzantium which I just reviewed today is excellent - from like page 3 or 4 on when the action moves to Byzantium itself, it rolls to the end.

And as a short novel or long novella, it's a fast read too

The names are a hoot too...

Liviu, I read your review and it picked my interest for the book further on :)

The Hitchhiker's Guide to the Galaxy is one of the better books I've read. I love the style and approach to the book with the slight humor surrounding it. That'll be a good read.

Robert, I read them and they are a good read indeed. And these anniversary books look good :)