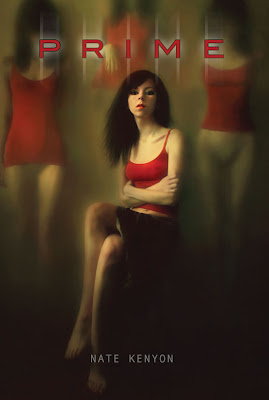 "Prime"
by Nate Kenyon
Format: Paperback, 156 pages
Publisher: Apex Book Company
When simulated interactions are an essential part of life, a programming glitch can be devastating, especially for the company that controls the sims.
William Bellow is an experienced bug hunter who comes as close as any human to the anticipated Transformation that links man to machine. As he digs into the problems surrounding New London’s most advanced programming, the nature of his own memories and the events of his past are called into question. Desperate manipulations and complex deceptions take him from the corporate towers to the underground resistance as Bellow’s work quickly escalates into a fight for his life in both the physical and virtual worlds.
Nate Kenyon is the author of three published horror novels, “Bloodstone”, “The Reach” and “The Bone Factory”, but with the novella “Prime” he makes an exploration into the science fiction genre.
“Prime” is a science fiction novella at its core, but Nate Kenyon mixes in his story elements of mystery and cyberpunk. The novella is set in a distant future of our world, in New London a city raised on the foundation of London and controlled by the corporation with the same name. I recognize whenever I get the chance that I am a sucker for world building and the Nate Kenyon’s novella leaves me satisfied with this aspect of the story. The way Kenyon builds his vision of our future has reminiscences of his horror novels, because it is an unsettling and an undesirable one. I really liked the concepts behind Nate Kenyon’s vision, advertising messages that shift according to brain waves, pleasures offered through computer programs and a powerful corporation behind all of this.
And it is the New London corporation that hires the bug hunter, William Bellow, the main character of the novella. William Bellow comes after a six years retirement period and in his investigation he will search for information regarding his retirement years too. This side of his investigation helps the story reach a new depth and his character to develop further on. With quite a few qualities on his side, technical improvements, ability to interact with computer programs and fighting skills, he is an interesting character. But I believe that William Bellow would have benefit more of further development and I think that because of the length of the story he doesn’t reach his maximum potential.
The object of William Bellow’s investigation will remain a mystery until the end of the story and I really liked how Nate Kenyon manages to keep this mystery until the very end of his novella. I also liked how Kenyon manages to keep a steady rhythm throughout the story, with many action scenes and a pace that doesn’t falter. Very interesting too is that Nate Kenyon brings in the story themes of our reality, aspects of our society and its development, which leave the reader on thoughts. I find these themes, like the main character, to be underdeveloped as well with their potential not reached, but which present an interesting side of the story.
Overall I believe that Nate Kenyon’s “Prime” would have been better if its length would have been longer. Still, with concepts that reminded me of the movie adaptations of Philip K. Dick’s novels, “Blade Runner” and “Total Recall”, and with a story that captivated me, Nate Kenyon’s “Prime” offered me a very enjoyable reading and one that I will not regret repeating in the future.
Posted by Mihai A. at 12:07 PM

I prefer a book that feels as though it didn't have enough words to one that had far too many. :)
I might well give this a look thanks Mihai.

Adele, you are right, those that have far too many words are worse. I hope you'll like this one if you get the chance to read it :)