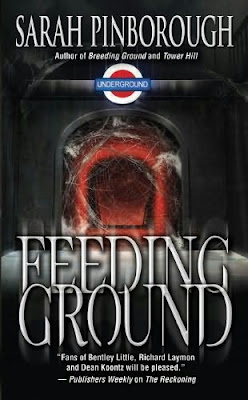 "Feeding Ground"
by Sarah Pinborough
Format: Paperback, 320 pages
Publisher: Leisure Books
The review is based on a bought copy of the novel.
London streets that were once filled with pedestrians, tourists and shoppers are now clogged with thick webs and dead bodies. Spidery creatures straight out of a nightmare have infested the city, skittering after their human prey, spinning sticky traps to catch their food…
A few desperate survivors have banded together, realizing their only hope for survival is to flee the dying city. Their route will take them through wrecked streets, into an underground train station. Only too late will they discover their deadly mistake: their chosen tunnel is home to the hungry creatures’ food cache, filled with cocooned but still living victims. Instead of escape, the group has run straight into the heart of a…FEEDING GROUND
Sarah Pinborough won the British Fantasy Award this year for the best short fiction and that proved to be an excellent reason for me to start reading her works. And the first opportunity appeared with Sarah Pinborough’s latest released novel, “Feeding Ground”.
“Feeding Ground” works on the premises set by another novel of Sarah Pinborough, “Breeding Ground”, but nothing says that this is a sequel of that novel and I can’t tell if it is, because I haven’t read that one yet. Still, “Feeding Ground” works very much on its own and I didn’t find many gaps unfilled by the connection with “Breeding Ground”. It is true that it might be possible for some of the novel’s aspects to have a deeper explanation in the first novel, but there is nothing that stand in front of my enjoyment of reading the novel in that way.
What I liked the most at the “Feeding Ground” is that although the novel’s scenario has in its center some nightmarish creatures Sarah Pinborough doesn’t concentrate necessary on them. Sarah Pinborough doesn’t overuse her creatures, excessive violent images or gory scenes and that is a thing I very much appreciated. Instead she focuses on the human factor, on the psychological aspect of the situation imposed by the novel’s scenario and on the characters’ struggle for survival. This approach makes the novel more powerful and I enjoyed more because of it.
I also liked how Sarah Pinborough deals with her characters. She follows three groups which in the end will converge and in these three groups there are quite a few characters with which the author deals. Although there isn’t much room for the characters to develop properly, mainly because of their numbers, I don’t find them to be flat and uninteresting. It is true that I attached myself more to some of the characters than the others, but all of them are playing their role in the right way and I could easily see the changes they suffer because of the situation they are facing. Also I liked a lot that none of the characters are excused in the survival game and can end up in situations without an exit.
“Feeding Ground” is a well balanced novel, with a steady rhythm and pace. It starts its action right from the first paragraph and installs its unsettling atmosphere from the same paragraph. There are a few twists and turns within the story and quite a few action scenes, but nothing in excess. There are a few weaker aspects of the novels, but not many. One thing that I can’t pronounce myself to is the questions regarding the creatures of the novel and their provenience. This is more of a personal curiosity and nothing serious that stood in my enjoyment of the novel and I think that although there are hints in the novel regarding this aspect there might be a deeper link with the “Breeding Ground” novel I mentioned. But that I have to investigate by reading that novel. Second there are a few introspections within these creatures which I thought that could have been left out. I didn’t find them very relevant and I think that their connections from the story could have been made without them.
Sarah Pinborough’s “Feeding Ground” proved to be a catchy reading and a novel that besides its horror scenario forays into the human condition and the changes it suffers when facing a survival situation.
Posted by Mihai A. at 11:58 AM

Cindy, I am looking differently now at the subway stations ;)

Geoff, thank you for clearing things up. I am going to read "Breeding Ground" soon too :)

It's amazing how many established names in horror I'm learning about this year. Pinborough's is another name I've only recently discovered through blogs and podcasts. It just goes to show that browsing bookshelves in shops is simply not enough to become deeply immersed in the genre. I'm not sure if "Feeding Grounds" or "Breeding Grounds" are titles I'd be interested in, personally, but I think I'll have to give them a chance if I come across them anytime down the road.

It's true that we need a wider range of sources in finding new authors. I have the Internet as main source since my town has a very small bookshop and the English titles are not available here :)