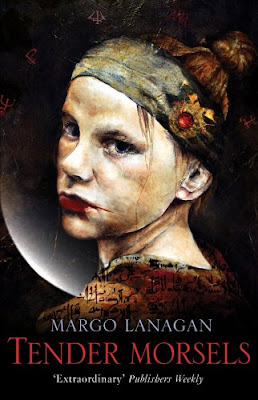 "Tender Morsels"
by Margo Lanagan
Format: Hardcover, 496 pages
Publisher: David Fickling Books
Review copy provided through the courtesy of the publisher David Fickling Books
Liga endures unspeakable cruelties at the hands of her father, before being magically granted her own personal heaven, a safe haven from the real world. She raises her two daughters in this alternate reality, and they grow up protected from the violence that once harmed their mother. But the real world cannot be denied forever . . .
Magicked men and wild bears break down the borders of Liga’s refuge. Now, having known Heaven, how will these three women survive in a world where beauty and brutality lie side by side?
Margo Lanagan is an Australian author whose works have been recognized with two World Fantasy Awards for the Best Short Fiction (“Singing My Sister Down”) and the Best Collection (“Black Juice”) and a nomination for the Michael L. Printz Award for the same “Black Juice”. Her latest novel, “Tender Morsels” gathered also recognition with a nomination for the Michael L. Printz Award, but also some controversies around it.
“Tender Morsels” is categorized as young adult fiction, but is exactly from there the controversies are coming. Margo Lanagan’s novel, in its first part, presents to the reader a few violent acts that certainly do not look aimed for a young audience, since those are acts of sexual abuse. However, these acts are only scratched at their surface, none of them being explicitly depicted, I only guessed their development. Still, I don’t find these acts to be misplaced. After all, it is not necessary for the young audience whom is the main target of the novel to learn about these acts of violence from this book. It is just necessary to open the TV, the radio or the newspaper and see a world that seems to lose its innocence and acts of violence more explicit and more brutal than those from “Tender Morsels”.
Margo Lanagan’s novel has at its base a German fairy tale, “Snow-White and Rose-Red” with the best known version written by the Grimm Brothers. But “Tender Morsels” is not just an interpretation of that tale, but also a fairy tale on its own, one beautifully created by Margo Lanagan. The author manages to capture beautiful images in her story and creates two worlds that magically captured me. Margo Lanagan entangles in her story realities of our world and dreams that many of us had or have, but she also challenges these realities and dreams. In particular I liked the fact that although in “Tender Morsels” we have two distinct worlds, one a desired and peaceful heaven and the other a harsh and difficult one, it seems that both of them miss elements that will make them perfect, but both of them have wonderful aspects.
I have to admit that sometimes looking over the difficulties of the world from “Tender Morsels” I wished for the main characters to remain in their corner of paradise. But here is the exclusive merit of the author, who not only captures many emotions in her story, but also made me feel most of them. I also liked that the characters have their unique and strong voice and I could feel them manifest it in each dialogue they have within the story. Still, I have to say that I couldn’t attach myself too much of any character, but I believe that this is because I do not have a common ground with any of them.
Despite all this I cannot honestly say that I enjoyed “Tender Morsels” in the fullest. I usually go with readings that have a bit more action, at least some, and Margo Lanagan’s novel seems to miss these. But although the novel doesn’t match my criteria of favorite readings I have to say that Margo Lanagan writes beautifully and “Tender Morsels” is a thought provoking fairy tale.
Posted by Mihai A. at 12:11 PM

I have this one on my list to review as well. I must admit I do keep putting it off as I'm not sure I will like it. I have found rave reviews and others like yours. Hmm. Thanks for the review.

Thank you very much :) It certainly can get mixed feelings, but I don't regret reading it.