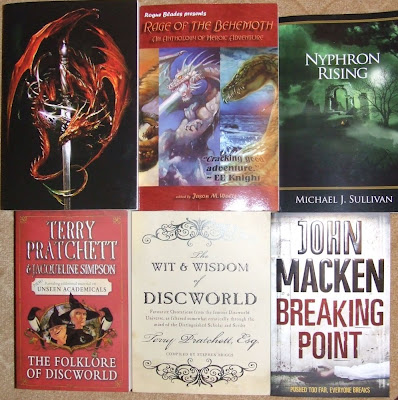 Here are the latest arrivals in my mailbox. I've been looking forward for the Pierre Pevel's novel, "The Cardinal's Blades", so this one certainly will be my next reading, as soon as I finish the current one :)
- "The Cardinal's Blades" by Pierre Pevel (through the courtesy of Gollancz);
Paris, 1633. Louis XIII reigns over France . . . and Cardinal Richelieu governs the country. One of the most dangerous and most powerful men in Europe, Richelieu keeps a constant, sharp eye on the enemies of the Crown to avoid their assassination attempts, thwart their spies and avert their warmongering. But he's up against people who will stop at nothing to achieve their goals, even going so far as to forge alliances with France's oldest and deadliest enemies. Spain, and the Court of Dragons.The nobility keep tiny dragonnets as pets; royal couriers ride tame wyverns, and lethal man-shaped scaled dracs ropam the country. But the power rising from the Court of Dragons is anything but mundane; the Black Claw sect draws on dragons as they once were: ancient, terrible, utterly merciless . . . and poised to move against France.
Faced with the growing threat from Spain, Richelieu summons Captain la Fargue, an exceptional swordsman, devoted officer and brilliant leader. If he's to turn aside the Black Claw's schemes, La Fargue and his legenday company of swashbucklers and rogues must be persuaded to once again risk their lives, fortunes and reputations for Richelieu, and for France.
It's the biggest challenge yet for The Cardinal's Blades - and they'll need to be sharp . . .
- "Rage of the Behemoth" edited by Jason M. Waltz (through the courtesy of Rogue Blades Entertainment);
This RotB Anthology contains 21 stories about the biggest, baddest, boldest behemoths ever to roar across the pages of heroic adventure! Over 150,000 words of monstrous mayhem record the ferocious battles that rage between gargantuan creatures of myth and legend and the warriors and wizards who wage war against, beside, and astride them. Behemoths and battles will be presented in four-story sections of five different habitats introduced by the stunning illustrations of John Whitman and headlined by well-known authors Mary Rosenblum, C.L. Werner, Brian Ruckley, Lois Tilton, and – writing together for the final time - Andrew Offutt and Richard K. Lyon.
- "Nyphron Rising" by Michael J. Sullivan (through the courtesy of Robin & Michael Sullivan);
War has come to Melengar. To save her kingdom, Princess Arista runs a desperate gamble when she defies her brother and hires Royce and Hadrian for a dangerous mission.
As the power of the Nyphron Empire grows, so does Royce's suspicion that the wizard Esrahaddon is using the thieves as pawns in his own game. To find the truth, he must unravel the secret of Hadrian's past…what he discovers could change the future for all of Elan.
- "The Folklore of Discworld" by Terry Pratchett & Jacqueline Simpson (through the courtesy of Transworld Books);
Most of us grow up having always known to touch wood or cross our fingers, and what happens when a princess kisses a frog or a boy pulls a sword from a stone, yet sadly some of these things are now beginning to be forgotten. Legends, myths, fairytales: our world is made up of the stories we told ourselves about where we came from and how we got there. It is the same on Discworld, except that beings which on Earth are creatures of the imagination - like vampires, trolls, witches and, possibly, gods - are real, alive and in some cases kicking on the Disc.
- "The Wit & Wisdom of Discworld" by Terry Pratchett (through the courtesy of Transworld Books);
The Wit and Wisdom of Discworld is a collection of the wittiest, pithiest and wisest quotations from this extraordinary universe, dealing one-by-one with each book in the canon. Guaranteed to transport you back to your favourite or forgotten Discworld moments it is the perfect book for die-hard Pratchett fans, as well as anyone coming to the Discworld for the first time.
- "Breaking Point" by John Macken (through the courtesy of Transworld Books).
There is a killer loose on the London Underground. He kills without leaving any forensic trace, and seemingly without motive. Genecrime, the UK’s elite forensic unit, are stretched to the limits trying to find one usable clue.
And there is another problem facing Genecrime. Before he was sacked as head of the unit, Reuben Maitland developed a system to predict latent homicidal behaviour from people’s DNA. Now rogue elements in the police, believing that prevention is better than cure, are using Reuben’s research to hunt down and incite latent psychopaths beyond their breaking point.
Reuben must track down whoever is misusing his technology and stop them before more lives are destroyed. But what he cannot know is that his investigation will lead him directly into the path of the Underground killer.
Thank you all very much!
Posted by Mihai A. at 12:07 PM

That is funny! Yesterday I received a message that I won "Breaking Point" by John Macken at a giveaway.

Am I right that "Nyphron Rising" by Michael J. Sullivan is the third novel of the Riyria Revelations series?

I gotta say, that's a snappy title for The Wit & Wisdom of Discworld. And that's also a nice blurb about The Cardinal's Blades. I might have to look it up at my bookstore.

Love that cover for The Cardinal's Blades!

And that Rage of the Behemoth looks good too, if I say so myself :)

Michael, indeed "Nyphron Rising" is the third novel in the series.

Jason, I am with you, "Rage of the Behemoth" looks good :)

I came across The Cardinal's Blades the other day and thought it sounded really good - love the cover too. Hope you enjoy all your books :)

Thank you :)
The cover artwork is very good indeed. And considering that I love the Alexandre Dumas' novels I can't wait to read this one :)