Cover art - "The Adamantine Palace" by Stephen Deas (US edition) 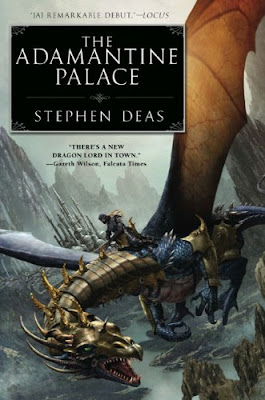 Usually, I find the covers for the UK editions of certain novels to be better than those of the US editions, but that doesn’t mean that the US market doesn’t have excellent cover artworks. One such case is with the cover for Stephen Deas’ “The Adamantine Palace”, which has a simple and effective illustration on the UK edition, a very beautiful illustration on the French edition and, now, an excellent artwork nonetheless on the US edition, due to be released by Roc on 2nd of February. I love this cover because the dragon and its rider look very good and because the scenery is an excellent one. I don’t know exactly who the artist is, although I tried to find out, but she/he is a talented one.
Synopsis of the Roc edition:
The power of the Realms depends on its dragons. With their terrifying natures, they are ridden by the aristocracy and bred for hunting and war. But as dangerous political maneuverings threaten the complacency of the empire, a single dragon has gone missing. And even that one dragon-returned to its full intelligence and fury-could spell disaster for the Realms...
Posted by Mihai A. at 12:22 PM

Reading your post made me realize that it's been years since I've read a dragon book. I actually can't even remember the last dragon book that I read. Did Carol Berg's books have dragons in them?

This one was on my list a while ago but I sort of forget about it....thanks for reminding me.

Simcha, I still get my usual number of dragons :)

Ben, "The Adamantine Palace" is still on my shopping list, but I will buy a copy pretty soon :)

I asked the author (on his blog) and he was fast in answering (by e-mail): "The cover art for the US edition is by Stephen Youll".
Yes, now that we know it is quite amazing how we didn't realize it :)

True. But it is good that we finally found out. Thank you very much, Bear :)

Definitely a great cover...and a book/author I'm not familiar with. Thanks for brining it to my attention - I'm going to check it out.

Susan, I have to check Stephen Deas' novel too :)